The Godliness of Labor

"Now we command you, beloved, in the name of our Lord Jesus Christ, to keep away from believers who are living in idleness and not according to the tradition that they received from us.  For you yourselves know how you ought to imitate us; we were not idle when we were with you, and we did not eat anyone's bread without paying for it; but with toil and labor we worked night and day, so that we might not burden any of you.”  (2 Thessalonians 3:6-8)

Labor Day weekend is an appropriate occasion to talk about Christianity’s view of work and labor.  I would venture to guess that it is unlikely that you’ve heard a sermon on that topic!  While it’s not an official doctrine of the church, such as you would find in a creed or a book of systematic theology, one can find in the Scriptures and in our tradition a definite perspective of work and labor that is important for us to be familiar with, given the importance of labor and working to our everyday lives.

So let me begin by saying that this year marks the 114th anniversary of Labor Day as an official America holiday, originally established by Congress in 1894 to honor the social and economic achievements of the American workforce.  In the culture at large, Labor Day also has come to mark the official end of summer, the last chance to get away for a little vacation before the beginning of the busy fall season.

Today we want to very briefly look at what our faith understands about labor and work.  In the Christian faith, what we find is that work, in the ordinary sense of the everyday, routine labor by which we earn our daily bread, our livelihood and the means to sustain our life, is regarded as both normal and inevitable, a part of God’s created order of things in the world. 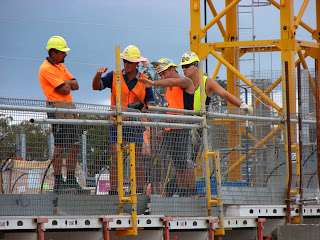 In both the Old and New Testaments, productive labor is strongly encouraged.  In the Old Testament book of Proverbs 10:4, for example, we read, “Lazy hands make a man poor, but diligent hands bring wealth”.  The biblical writers did not think of labor as degrading, undesirable, or something to be escaped from.  Unlike the ancient Greeks, who tended to think of working as beneath the dignity of a citizen gentleman, leaving it for slaves and other inferior people to do, the Jewish people looked upon daily work as a normal part of the divine ordering of the world, and no person was to be exempt from it.

This attitude remains true today in the Jewish ethos.  For example, the first prime minister of the new State of Israel, David Ben Gurion, once said, “We don’t consider manual work as a curse, or a bitter necessity, not even as a means of making a living.  We consider it as a high human function.  As a basis of human life.  [In fact, it is] the most dignified thing in the life of a human being.”

If labor be seen in such a way, as the common lot of humankind, it is therefore something to be accepted without complaining, thus fulfilling with cheerful obedience the intention of the Creator for human existence. Every human being is by nature a worker, by means of which both our material and spiritual needs are provided for.  There is an inherent dignity in human labor, that comes from the purpose of God in creation.

Even the Fourth Commandment, which admonishes us to rest on the Sabbath, assumes that the normal weekday is to be occupied with work of some kind.  The great French sculptor Auguste Rodin once said, “With six days of hard labor we buy one day of happiness.  But whoever does not know the six will never have the seventh.”

Our Lord Jesus himself, in the three decades before his all-too brief public ministry, toiled as a craftsman—a producer of wood products in his hometown of Nazareth.  We don’t often think of this period in Jesus’ life, but it would be unwise to underestimate the profound effect these 30 years must have had on his life and thought.

And St. Paul, even as he traveled around the Mediterranean Sea on his missionary journeys, worked at the craft of tent-making in order to earn his living, refusing any kind of salary or compensation from his churches, allowing him to set a good example of honest labor for his congregations.  Even today, there are some denominations such as the Baptist Church which utilize many pastors who while preaching on Sunday also work at other full-time jobs on the side in order to make a living.  (Now please, don’t get any ideas!)

And as our scripture reading from his second letter to the Thessalonians makes clear, Paul felt that the Christian believers to whom he was ministering should be working to support themselves economically.  He went so far as to say, “If anyone will not work, let him not eat.”  For Paul, this issue of labor was not only a survival issue but a moral issue as well.  He wrote to those who were being lazy, “Now such persons we command and exhort in the Lord Jesus Christ to do their work in quietness and to earn their own living.” (3:12)

What both of these biblical examples show us is that work which serves both the family and the larger community by producing goods and services of value to that community, is of great value and importance in the eyes of God.

In our day, unfortunately, we have too often come to see work as something to be escaped from, rather than sought as a part of God’s will for our lives.  In a really excellent book published some years ago entitled Why America Doesn’t Work, Chuck Colson and Jack Eckerd lament the loss of America’s traditional work ethic and analyze why this is so.  They make what I think is a very wise observation, namely, that “the loss of the work ethic does not begin in the workplace; it begins in the hearts of people--in the values that motivate them or fail to motivate them.”

So how should Christians look upon labor?  First of all, labor is to be respected and valued.  No matter what its nature, whether it be as a physician, a teacher, a lawyer, a clerk, a secretary, a sanitation worker, or truck driver, as long as it fulfills a social need and serves the community, then such labor and those who perform it are to be treated with dignity and respect.  There is to be no condescension or disdain shown toward any profession or work, as if some work were intrinsically more valuable than another.  Just as all persons are finally equal in God’s sight, so is all useful labor.
Consequently, Christian workers treat other people the way they want to be treated.  We all want to be treated with courtesy and kindness, with fairness and dignity.  So that is how we should treat others.  If you wish to be treated kindly, then treat others kindly.  If you wish to have friends, then be a friend.  “Do unto others as you would have them do unto you,” said our Lord.

Secondly, work is obviously done in part to make a living, but it is also a way of serving the greater community.  After all, one can make money doing lots of different things, but not everything serves the community.  The best example I can think of is working at being a drug dealer.  One can make lots of money working at selling drugs, but it turns out to be destructive of the community rather than a positive and constructive force.  Clearly, selling drugs is illegal.  But one can think of quite a few occupations and sources of labor that may be legal but are nonetheless destructive of the greater community and therefore should probably not be engaged in by a Christian.

Thirdly, Christian workers are to be honest.  Honest employees do not steal from their companies, nor are they fraudulent.  The Christian worker does not refrain from stealing merely because of the fear of being found out and punished, but because they have integrity and because they wish to please Christ with their honestly and uprightness.

We are not to be like the farmer who once took a wagonload of cotton to the cotton gin to be sold.  While the gin owner was busy with weighing the load, the farmer sneakily stepped onto the scales and dishonestly added his weight to that of his cotton.  The gin owner happened to see it all but said nothing until he had paid the farmer. The check was made out for all that scales measured.  And then as the farmer was leaving, the gin owner said, “John, you sold yourself today for a dollar and thirty-seven cents.”

And that’s what dishonesty is.  It’s a selling of ourselves and our integrity for a little cash, or something of equal value.

And not only are Christians honest in their work, they also seek to give an honest day’s work.  Work is generally hard and requires a lot of effort.  But that is the nature of work, and we only hurt ourselves, as well as the rest of society, when we shirk the effort that our work requires.  So whether it’s a shelf you’re stocking, a table you’re building, an account you’re auditing, a surgery you’re performing or a sermon you’re writing, anything that is worth doing is worthy doing well.

Finally, work should not be seen as something that we do merely for our own survival or happiness, or even just for the community, but something that ultimately we do for the glory of God.
Colson and Eckerd tell the story of three men who were working on a large stone church, basically all of them doing the same thing.  They were asked, “What are you doing.”  The first man replied, “I’m cutting a stone.”  The second man responded, “I’m helping to put up this stone building.”  But the third man said proudly, “I’m building a cathedral to the glory of God.”

That’s an important part of the answer to worthwhile work, isn’t it.  Considering our labor to be done to God’s glory and for the sake of Christ.  The great composer Johann Sebastian Bach inscribed the letters SDG at the bottom of every one of his great compositions, which stand for the Latin phrase Sola Deo Gloria, meaning “to the glory of God alone.”

And a office secretary once said, "When I began to envision Jesus standing behind my boss, my work changed.  I had to do my very best.  Even the most menial tasks became a joy, and my attitude changed from arrogance to respect.”

Our daily work, from this vantage point, is a form of service to Christ himself.  It should always be done well, to the glory of God.

I want to end with this quotation by some anonymous writer that I thought was well-said: “If you are poor, work.  If you are rich, work.  If you are burdened with seemingly unfair responsibilities, work.  If you are happy, continue to work; idleness gives room for doubts and fears.  If sorrow overwhelms you, and loved ones seem not true, work.  If disappointment comes, work.  If faith falters and reason fails, just work.  When dreams are shattered and hopes seem dead—work, work as if your life were in peril….No matter what ails you, work.  Work faithfully, and work with faith.”  (Author Unknown)

Lord, help us to do our best everyday at work.  Let us never shirk our duties, nor give less than our best.  For in serving well at our places of employment, we are also serving you.  Amen.