Ukraine is back in the news, and with a vengeance.  In what can only be seen as a very strange event, a Malaysian passenger airline on route from Amsterdam to Kuala Lumpur crashed yesterday in the war zone of eastern Ukraine, killing all aboard.  Initial reports indicate that it exploded in mid-air, spreading debris over a number of miles. 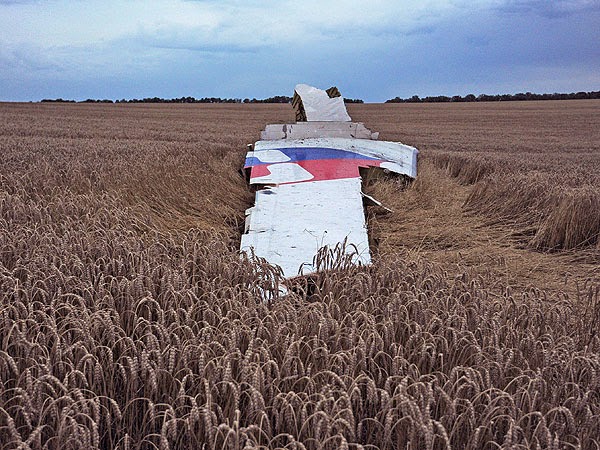 Initial speculation is that an anti-aircraft missile fired by Ukraine separatists fighting the current Ukrainian government may have brought the plane down.  Again, speculation is that since the separatists wouldn't have any motivation to fire upon an international passenger airliner, it was accidentally targeted by the separatist militias who thought they were actually firing on a Ukrainian military plane, something they had been doing recently.

Obviously, this is a horrible tragedy in anyone's book.  An increasingly vicious civil war in Ukraine has been waging for months, with the rebels in the area closest to the Russian border being aided indirectly and somewhat surreptitiously by the Russian government, while the Ukrainian government is being aided quite directly by the United States and its allies.

It would nice of course if all sides would wait until sufficient evidence surfaced as to both the actual circumstances of the crash, as well as any responsibility for the tragedy, before spinning the event for strategic and political purposes.  But that would be asking too much from warring parties (including the US), wouldn't it.  Of course it would.

In fact, in the initial hours or even days, one can't know for sure whether it was even a missile that caused the crash, or perhaps a bomb planted onboard, or a suicide bomber, or even a plane malfunction of some kind.  The plane wreakage is in a war zone, precluding any kind of immediate inspection, let alone sufficient investigation.  So all we really have are some bare facts, like the plane crashed and everyone onboard died, and many, many families around the world are grieving the loss of their loved ones.

Posted by Carl Lindquist at 3:20 PM