The Rise of Rick Santorum

Once again, we have a new leader in the Republican race for the 2012 Presidential nomination: Rick Santorum.  He is the 11th Republican to lead a national poll in this 2012 election poll (the others are Michele Bachmann, Herman Cain, Chris Christie, Newt Gingrich, Rudy Giuliani, Mike Huckabee, Sarah Palin, Rick Perry, Mitt Romney and Donald Trump)! 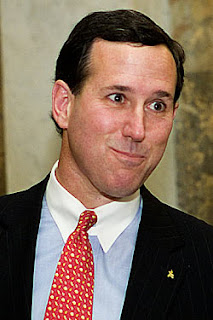 Other than Ron Paul, Santorum is the last of the candidates to take the lead over Mitt Romney.  Just when it looked like Romney was finally vanquishing his rivals, after rolling over them in the huge state of Florida, Santorum came roaring back in the mid-western states of Minnesota, Missouri, and Colorado.

So who is Rick Santorum?  He is a 54 year-old native of West Virginia and Pennsylvania, educated in Pennsylvania universities, and he has served as a US Congressman (4 years) and a US Senator (12 years) from Pennsylvania.  In the course of his Senator experience, he rose to the number three position in the Senate Republican leadership.

Unlike the quirky Gingrich, Santorum is a life-long Roman Catholic who leaves no doubt that he is a cultural conservative when it comes to religious and ethical matters.  He has been married one time and has eight children, all of whom have been home-schooled.  Here is how Wikipedia describes him:


In his 2005 book, It Takes a Family, Santorum advocates for a more "family values"-oriented society centered on monogamous, heterosexual relationships, marriage, and child-raising. He is pro-life. He opposes same-sex marriage, saying the American public and their elected officials should decide on these "incredibly important moral issues", rather than the Supreme Court, which consists of "nine unelected, unaccountable judges.”

Somewhat like Ron Paul, but only on the other side, Rick Santorum seems to be a person of integrity who doesn't change his positions easily, particularly on cultural and foreign policy issues. Besides being a very conservative Catholic in his social views, but he is also a foreign policy hawk. To take one example, Santorum is only one of two Senators to have voted against the nomination of Robert Gates to be Secretary of Defense by President Bush. He "stated that his objection was to Gates's support for talking with Iran and Syria, because it would be an error to talk with radical Islamists."

If Santorum were to become President, there seems to be little doubt that besides remaining in both Iraq and Afghanistan, we would also be attacking both Syria and Iran, and sooner rather than later.

Santorum was a a supporter of President Bush's torture policy, going so far as to say in 2011 that John McCain, who was tortured as a prisoner of war, did not understand how the process works.  Here, it seems to me, is a man who is ideologically confident!

Rick Santorum has a pleasant demeanor in his media interviews and even in the debates, showing a quick smile and basic courtesy.  Yet behind that exterior lies a tough, conservative mind and soul.  He seems totally committed to his Catholic cultural conservatism and his neo-conservative hawkishness.

The one area of his thought and policy where he might different from the areas is in economic policy, where he seems more open to government interference in markets to enhance the opportunities for manufacturing.  He seems genuinely concerned about the working class voter.

Santorum is a welcome addition to the Republican field.  Compared to the other three men left in the race, he just seems more normal, like someone you'd have a beer with at a local tavern in Pittsburgh.

But, even though I'm a Pennsylvanian myself, I still can't imagine myself for him.  He is such a conservative in both cultural and foreign policy issues, that it seems to me that he would be the return of George W. Bush, only worse.
Posted by Carl Lindquist at 7:17 AM