Good Speech, Mr. President. You Make Me Proud To Be An American.

My reaction to President Obama's 'State of the Union' Speech: 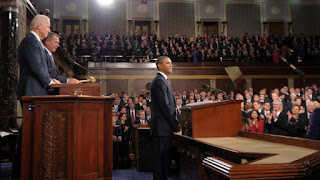 Good speech, Mr. President, filled with justifiable hope for the future (compared to the doom and gloom that followed you in the Republican response). Good example of that is GM's recovery...for which your administration can justly take credit. I hope that some of your proposals for 'insourcing' jobs are approved by Congress. Sound sensible to me.

I really like the 'Buffett Rule'. Makes absolute sense that Mitt Romney and people like him should be paying a more progressive chunk of their income, given their overwhelming wealth. It doesn't solve all our deficit problems, but it would help.

You are to be congratulated on your foreign policy achievements. Opponents who label you as weak or an appeaser are simply blowing smoke or committing false witness.

This was a good: "We can either settle for a country where a shrinking number of people do really well, while a growing number of Americans barely get by. Or we can restore an economy where everyone gets a fair shot, everyone does their fair share, and everyone plays by the same set of rules. What’s at stake are not Democratic values or Republican values, but American values. We have to reclaim them." Excerpt for some of the rich and a few libertarians, this is how most Americans think of our country.

The notion that you caused our economic problems is ludicrous. "In the six months before I took office, we lost nearly four million jobs. And we lost another four million before our policies were in full effect." Have Republicans forgotten the eight years under Bush and what resulted?

"I will oppose any effort to return to the very same policies that brought on this economic crisis in the first place. No, we will not go back to an economy weakened by outsourcing, bad debt, and phony financial profits. Tonight, I want to speak about how we move forward, and lay out a blueprint for an economy that’s built to last – an economy built on American manufacturing, American energy, skills for American workers, and a renewal of American values. This blueprint begins with American manufacturing." Sounds like a good blueprint to me. Republicans indeed want to return to the way it was....why would anyone want to do that?

About education, I hope you meant this: "To teach with creativity and passion; to stop teaching to the test". Living with a teacher, I can tell you that, right now, they have to teach to the test, and it's killing both their passion and creativity.

Toward the end of your speech, you included a beautiful thought: "Those of us who’ve been sent here to serve can learn from the service of our troops. When you put on that uniform, it doesn’t matter if you’re black or white; Asian or Latino; conservative or liberal; rich or poor; gay or straight. When you’re marching into battle, you look out for the person next to you, or the mission fails. When you’re in the thick of the fight, you rise or fall as one unit, serving one Nation, leaving no one behind."

Nicely done, Mr. President. You make me proud to be an American.
Posted by Carl Lindquist at 10:43 AM

Email ThisBlogThis!Share to TwitterShare to FacebookShare to Pinterest
Labels: Barach Obama, State of the Union Address