Back in the Saddle

Okay, I guess it's time to get back to my blog.  I've been away nearly two months now.  I guess I needed a break from it, although that's no excuse because I've been putting things on my Facebook wall that whole time.  But it's just a little easier to do that, it seems, plus it just seems more 'permanent' to post things to 'Rude Awakening' (though it's not really).  And, well, as the pictures shows, I've been doing some other things these nice spring days! 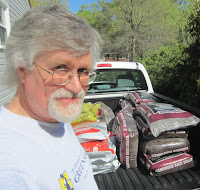 In any case, since I left in late February not too much has happened except that Mitt Romney has put away the Republican nomination.  So that bit of excitement is over, and now it's on to the general election.  Why does this thing take so long?!  It's not good for the country that it does, because not much actual governing gets done in the meantime.

Anyway, I'll be seeing you most days again.  Hope you are well!
Posted by Carl Lindquist at 7:24 AM