Romney in the Driver's Seat

I've just watched Mitt Romney's entire victory speech after last night's primary elections in five states. He gave what looks to be a summary of his entire forthcoming campaign. He definitely should win an award for the number of political cliches you can pack into eleven minutes! But that's what stump speechs are, and that aside it was an impressive presentation both in style and in content.

Here are just a few of the phrases he used: "One Nation Under God"; "Saving the Soul of America"; "Return to Founding Principles"; "Land of Opportunity"; "Restore American Greatness"; "We still believe in America as the land of opportunity and a beacon of freedom". 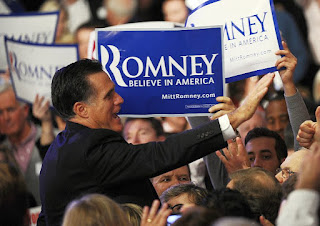 It seems to me that Mitt Romey will be doing his best to resurrect the spirit of Ronald Reagan: a spirit of optimism, hope, and conservative values. And of course in doing so, he will be painting Barack Obama and the Democrats in the worst possible light, even to the point of slanderous misrepresentation (ie. Obama's foreign policy is a 'strategy of appeasement'). But again, that seems to be fair in the game of politics, and he probably will be getting a good dose of it coming at him from the other side!


Will this work? To some extent, it will work, at least to unify the Republican Party and get them on board his campaign. As long as no Republican conservatives are hurling accusations at him, he should be able to make the conservative Party base forget about his flip-flopping or his being the 'Massachusetts Moderate'--see, you've forgotten it already--and unite in their distain and/or hatred for Barack Obama.

The question is where the independents of the nation end up. Once the campaign is in full-swing in the fall, once the heavy guns of the Obama campaign are trained squarely on Mitt Romney, once the two of them meet in their debates, then and only then will we see where those people in the middle end up. Going with the 'devil they know'--President Obama--or taking a chance on the new and fresh face from Massachusetts (or Michigan, or New Hampshire, or California, or Utah, or wherever he's from!).

The other big factor, of course, will be the economy and world events. If the economy sours between now and then--which it easily could, given the volatility of the European economy and dozens of other factors--then Obama is probably toast. If Israel attacks Iran and we're at war, then that could have an effect. And so on. Who would have guessed at this time in 2008, that the economy would have crashed, or that McCain would have picked Sarah Palin? You just never know.

So hang on for the ride...it's going to be a long and bumpy one, I'm afraid!
Posted by Carl Lindquist at 8:30 AM