American Politics as Pro-Wrestling: The Legacy of Andrew Breitbart

I didn't know much about Andrew Breitbart, but after his recent death, I saw how important he was to many on the rabid Right.  And then I read an article this morning about him in Harper's by Thomas Frank.  Frank may be a little harsh and obviously one-sided about Breitbart, but the larger point that is important is the condition of our political debate these days, and how Breitbart seemed to exemplify what is wrong. 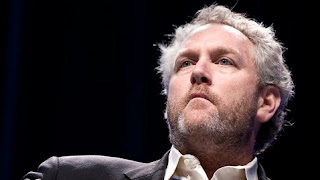 He started out as a man who loved to puncture Hollywood vanity, then became a VIP himself.  "Media is everything," he used to say, and by the end it was all he was—a caricature, as he reportedly confided in his final days to Sixties radical Bill Ayers. His articles and books, like the Supreme Court decisions of Clarence Thomas, were secondary and are now largely forgotten. What will be remembered is the ranting collection of pixels he leaves behind, those images of a stout man with graying hair and a snarling lip, saying something mean to someone.

As for Breitbart’s relationship with his one true love, the Internet, I think it is best demonstrated by recalling the way he once quarreled with a Gawker editor via instant message for three days. On and on the mighty champions fought, ultimately generating some 10,000 words between them while trying to hash out whether neo-Nazis could be described as right-wing. Here was an endless Iron Butterfly drum solo of pointless speculation and wandering rage, with no pauses to acknowledge things that are obvious to everyone or to check history books that might have cleared matters up quickly. Just two voices screaming at each other in the ether, their petty insults and accusations preserved for future generations.

For four decades now, the Breitbart model of political confrontation has been around in one form or another. The more I look back over its history, the more I am convinced that its closest evolutionary relative is pro wrestling. There are the same mock-feuds, the same posturing outrage, with the antagonists always avenging their vain selves or the wounded honor of their stage friends. The conflicts mean nothing.  There is nothing at stake. And in the end there is nothing to remember.

Posted by Carl Lindquist at 9:10 AM