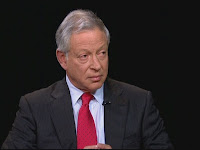 Don Gogel, CEO of a leading private equity firm and moderate Democrat, was interviewed on Charlie Rose over the weekend.  In the course of the interview, Gogel made what I consider to be a strong defense of the private equity industry (which of course includes Romney's Bain Capitol).  Gogel also voted for Obama in 2008, and considers to have been a good President in many ways.  But because of the recent Democratic attacks on the record of Bain Capitol, Gogel is considering voting for Romney.

This is the kind of person whose loss may handicap the President in his effort to be reelected.  I'm not sure that he's totally defected yet, since it is clear that he's uncomfortable with much of the conservativism represented in the Republican Party.  But he will clearly be a bellwether as to whether Obama will succeed or not.

You can watch the interview with Gogel here.

Ps.  Here's another take of private equity from Rolling Stone that isn't quite so positive.


There's only one problem with Romney's story: It doesn’t describe most of what private equity firms actually do. The companies Romney holds up as successes – Staples, Sports Authority et al. – were not Bain private equity deals; they were venture capital investments in companies that Bain neither owned nor ran. All well and good: Venture capital is a good thing – essential for funding the growth of new and developing companies. But Romney didn't make his fortune through venture capital­; he made it through private equity – and private equity, as President Obama pointed out this week, is a very different proposition. "Their priority is to maximize profits," the president said of PE firms, and "that’s not always going to be good for businesses or communities or workers."

Here’s what private equity is really about: A firm like Bain obtains cheap credit and uses it to acquire a company in a "leveraged buyout." "Leverage" refers to the fact that the company being purchased is forced to pay for about 70 percent of its own acquisition, by taking out loans. If this sounds like an odd arrangement, that's because it is. Imagine a homebuyer purchasing a house and making the bank responsible for repaying its own loan, and you start to get the picture.

Posted by Carl Lindquist at 1:47 PM