How The Mighty Have Fallen: The Rise and Fall of David Petraeus

I first got a sense of David Petraeus several years ago when I was having dinner with a group of male friends in Winston-Salem.  I only knew one of them, who was a good pastor friend, and the others were his friends.  One of those guys was recently out of the army, where he had worked as a personal assistant for General Petraeus.  He talked with wonder in his voice about this General Petraeus. 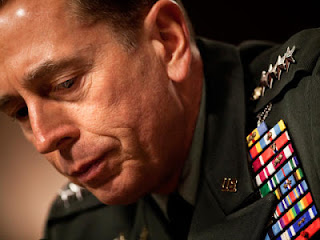 Petraeus was a fitness fanatic, he said.  He was a workaholic, who pressed his staff to work just as hard.  He was an intellectual, with the smarts to go very far, very fast.  And he said other things that I can't remember now.  But I came away thinking to myself, this General Petraeus sounds like a General George Marshall or even a Dwight Eisenhower, someone who could be President.

Ever since that night, I've paid attention to the career of David Petraeus.  I watched him as he ran things in the later stages of the Iraq War, as he moved on up to Middle East Commander, then took finally the Afghanistan assignment under President Obama.

Frankly, I was surprised and somewhat worried when President Obama assigned him to the position of CIA Director.  I wrote back then in these pages:


And as for Petraeus at CIA...what the heck? Why place a fairly controversial Army general and Special Forces expert at the head of a civilian agency that is supposed to (primarily) collect intelligence? The trend toward the 'militarization' of the CIA is very bad. It will only increase the tendency to use the agency for covert operations overseas, rather than objective intelligence gathering. And frankly, you can't run a civilian bureaucracy like the CIA as you would run a military organization, without distorting and corrupting its original mission. Anyway, putting Petraeus at CIA kills two birds with one stone for Obama: he keeps a certified warrior/killer busy doing what he loves, and he also keeps Petraeus from running for President at least until Obama is done.

Washington Post foreign policy columnist David Ignatius writes about Petraeus this morning, and he says this about his time at CIA:


Petraeus’s 15-month tenure as CIA director was short and, compared to his rocket-like ascent to four-star rank in the Army, something of a bumpy ride. He was a man who was used to a large staff that executed his orders, and what he found at the CIA was something closer to a covert university campus, with experts who behaved as if they had tenure, and a culture that prided itself on being contrarian and difficult to manage.

It wasn’t an easy fit, and within weeks, you began to hear grumbling from the CIA’s ranks about how Petraeus was trying to put his personal mark on every tree and fire hydrant in sight, asking too many questions, and pushing in his annoyingly relentless way for results.

The smartest thing Petraeus did was to form a partnership early on with Michael Morell, who was acting director before his arrival and resumed that role Friday. Morell is a career analyst and veteran of the mill that produces the famous “PDB,” or president’s daily brief, and he knew the agency’s culture — or at least the analysts’ version of it. His task was to encourage Petraeus when his commander’s instincts made sense for the agency, and dissuade him when his ideas were counter-productive.

Petraeus’s critics within the agency think Morell was co-opted by Petraeus. But there’s considerable evidence that, when appropriate, the deputy director was prepared to tell the boss the unpleasant truth. In any event, Morell came away a fan—recognizing that although Petraeus had a rocky start, his ceaseless pressure had been good for the agency.

“Petraeus is one of the best managers I have seen,” Morell said through a spokesman Friday. “He figures out where he wants the organization to go, and he drives it in that direction. He does this through relentless focus. He remembers what he asked for. Three weeks later he’ll say at the morning meeting, ‘Whatever happened to that? Is that done yet?’ I’ve never seen anyone with his drive — ever.”

Not that it was easy. “This place does not like hierarchy. People respect you because you do a job well, not because you’re the director,” observed one senior agency official. Petraeus had gone from “an organization trained to salute to one that was like herding cats,” another official said Friday, and it was “a huge transition for both sides.”

I happen to know at least one CIA analyst, a young woman and personal friend who has worked for the agency on the Middle East desk for several years. And I can tell you that she fits well the description above as to the culture and staff of the CIA, of "being contrarian and difficult to manage".

And, now, apparently, David Petraeus has been brought down by an extramarital affair.  In a way, it's not that surprising, given how many prominent men of upstanding character have been laid low by that scourge.  Sad but true.

Some are speculating that this could have something to do with the Benghazi incident.  It's certainly not impossible, but it seems improbable to me.  But in this day and age, if it does have anything to do with this, we shall find out.  There are few secrets anymore.
Posted by Carl Lindquist at 9:02 AM