Former Florida Congressman Allen West is definitely a bright star in the Right-wing firmament.  As an African-American conservative, his election to the House of Representatives in 2010 was seen as a coup for that political philosophy and a sign of good things to come.  His stunning loss in 2012 was a huge blow to the right-wing, only made a little more acceptable by the appointment of black conservative Tim Scott to a South Carolina Senate Seat.  What he'll do now is uncertain, although he'll probably, like Sarah Palin and other conservative political losers, make a good living on the lecture and Fox News circuit.

He recently spoke at the CPAC event in Washington and was well received by that highly conservative crowd.  One of my conservative friends on Facebook posted a excerpt of West's speech from that event, and because my friend and I like to tangle (always good-naturedly, of course) on politics, I took a look at the link to see what it was about. 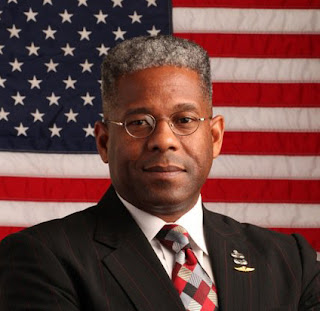 The link from Breitbart.com had this to say:


Former Rep. Allen West (R-FL) told the CPAC audience on Thursday that there is nothing a liberal fears more than black conservatives.

"There is nothing on this green earth that a liberal progressive fears more than a black American who wants a better life and a smaller government," West said, noting that he is tired of liberals dividing Americans up into small groups.

Black conservatives--like West and South Carolina Republican Senator Tim Scott--undermine the left's ability to exploit the race card for political gain, and that is why they are often on the receiving end of the most vitriol. It is why those like Ted Kennedy tried to destroy Clarence Thomas, and the mainstream press continues to ridicule him.

West said the Republic he loves does not know prejudice, and cited Supreme Court Chief Justice John Marshall who spoke of a "Constitution that was color blind, that neither knows nor tolerates classes among its citizens."

"How can you not romanticize America and idealize this great land of dreams?" West asked.

But he is incorrect in one major statement he made in that CPAC speech.  I've been doing a lot of reading in the last year or two on early American history, especially the issue of American slavery, and so when he quoted Supreme Court Chief Justice John Marshall as saying that the Constitution was "color-blind", that didn't sound right to me.  John Marshall was Chief Justice during the first quarter-century of the 19th century, a time when American slavery was actually on the increase and racism in America was perhaps at its all-time worst.

When I googled the quote, it turns out that it wasn't Chief Justice John Marshall who wrote it (he actually owned slaves!), but Associate Justice John Marshall Harlan, who served on the Supreme Court from 1863 to 1896.  And he wrote the quotation in a lone dissent from the Plessey v. Ferguson decision (1895), a crucial decision which upheld Southern segregation laws.

I suppose that was an easy mistake to make.  But unfortunately the meaning of the quotation is completely opposite of what West intended.  He clearly wanted to connect a major early American political figure with the notion that the Constitution was opposed to slavery and racism.  Unfortunately, what he ended up showing is that even as late as 1895, the Supreme Court was still interpreting the Constitution in a way that supported racial discrimination and oppression, and that our modern view of race--complete political and social equality--was still a small minority position, as our nation headed into the 20th century.  True racial equality and justice wouldn't even begin to be achieved until the 1954 Supreme Court decision of Brown v. Board of Education.

What I find is that conservatives in general have a very difficult time accepting the real American past of slavery and racial discrimination.  Instead they want to see an America that never existed....or as West himself put it, "How can you not romanticize America and idealize this great land of dreams?"

But it seems to me that you'll never understand America--where we've been, where we are, and where we're going--until you understand and accept the truth of vicious American slavery and racism.  In that acknowledgement comes the freedom and wisdom to move on into a brighter future for all of us.

Posted by Carl Lindquist at 1:52 PM