The American Love of Guns

After the Newtown shootings, when young Adam Lanza used an AR-15 and other firearms to kill over two dozen elementary school students and staff, I started to read and research about guns.  In particular, since the NRA kept touting their "Second Amendment rights", I wanted to know what the Second Amendment, with its language of keeping and bearing arms, actually meant historically and legally.  That led me in turn into the whole issue of the American gun culture. 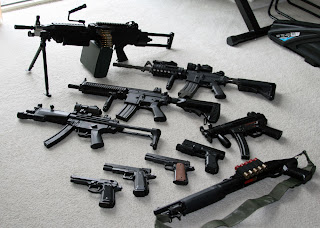 What I've learned is that Americans love their guns.  Or more precisely, America has developed a gun culture that values the right to own and use guns whenever and however it pleases.  For hunting, for sport shooting, for self-defense, for use in fighting against tyrannical government, for investment, and frankly, just for the hell of it all.

Not every American owns or loves guns, but enough of them do to make it difficult to pass laws against the 'keeping and bearing of arms".  I'm one of those who doesn't own a real firearm....all I've got is a Daisy BB gun, to try and scare the squirrels away from my birdfeeder.  I've never actually hit a squirrel to my knowledge, because I'm such a bad shot.  But, in any case, I haven't minded the fact that my dad, brother and other family members have owned rifles, shotguns, pistols, etc.

I discovered in my reading that the Second Amendment doesn't really mean what the National Rifle Association says it means, namely, an absolute right to own any weapon free of any regulation whatsoever.  That's the 'absolutist' interpretation, which the Supreme Court has never upheld.  Indeed, over the centuries since the Second Amendment was passed as a part of the Bill of Rights in 1789, it has been interpreted several ways, but never in the absolute way advocated by the NRA.  Most recently, the Supreme Court ruled in the 2008 Heller decision that there is some 'individual' right to own a firearm for self-defense in the home, but they also ruled that the Second Amendment has always allowed for reasonable governmental regulation against unusual and dangerous firearms and for possession by felons, the insane, etc.

But what needs to be understood is that regardless of what the Second Amendment says or means, there is also a strong American gun culture that has enough political saavy and strength to prevent gun control legislation of any real strength from passing.  It is this gun culture, and the political strength it demonstrates, that has brought us to the point in America where there are said to be something like 300 million guns in private hands, and where there are more gun deaths in America during peacetime than any other country on the face of the earth.

The advance of weapons technology has of course made all of this worse.  Back when the Second Amendment was approved, even the best firearm was an inaccurate, bulky, hard-to-load-and-fire musket.  Now we have weapons on the civilian market like the Bushmaster AR-15, which is capable of accurately shooting hundreds of rounds of extremely lethal ammunitions in minutes.  And there are hundreds of weapons just as deadly by a variety of manufacturers available on the market.

What has brought us to this moment in time, where a mentally-ill young man can steal his mother's AR-15 and go to a local school and kill dozens of young children and teachers before the police can arrive?

Here's just a few of the factors.  We have a very big country that was founded on the principle that you were free, basically, 'to do your own thing'.  We never had a King, with absolute Divine Right to rule over everyone, we never were serfs in a medieval society; instead, we (white folk, at least) were free citizens in a free country that developed a vigorous culture of individualism.  A society tailor-made for a strong gun culture, enhanced by the language of our constitutional Second Amendment.

Then you had the 'frontier' and the 'Wild West', where new immigrants and adventuresome settlers kept moving west to settle new lands (most of it stolen from the original Indian inhabitants, who therefore weren't very happy about it).  Obviously, they needed firearms to fight those Native Americans and to keep some semblance of order in a basically ungoverned land.  This went on for centuries in America, long enough to establish the habit of pervasive gun ownership and use.

Then there were the advances in gun technology, starting in the early 19th century, which made guns smaller, more accurate, easier to load and fire, and much more lethal.  In a country like ours, such weapons made 'every man a king', and every man's home a castle.  Add to that our slave society, where the threat of slave insurrection kept the (Southern) white population fully armed, locked and loaded, ready to defend themselves against the rebellious black man.

Then there are our citizens-soldiers (previously called 'the militia'), who pride themselves on being ready to go to war at a moment's notice.  Our 'minutemen' tradition has encouraged gun ownership and skill over the centuries.  Indeed the NRA was actually founded by military and political leaders to encourage marksmanship, with millions of surplus army weapons being sold at a severe discount to NRA members over the 19th and 20th centuries.

Add to all of this our modern movie industry, with its tradition of Westerns and violent action films, where guns are omnipresent and the killing of 'bad guys' by the 'good guys' with guns (or vice versa) has drummed into our heads the importance of being armed at all times in order to stop the bad guys who obviously surround us at all times.  It has gotten to the point where it seems like a new action film with nonstop gun violence is released every few days.

And then there are the new video games, which many of our young people play virtually nonstop and in the process 'virtually' kill innumerable bad guys on the big screen in front of them.  Killing is no big deal to our young people, some of whom find it hard to distinguish between the violence on the screen in front of them and violence in the real world.

I could go on and look at the breakdown of the family, the common violence of domestic abuse, the frightening occurance of mental illness, the use of guns in committing suicide, and so on, but you see what I'm getting at.

This is the way we've been for hundreds of years now in America; indeed, it seems to be in our cultural DNA. So realistically, very little is going to change anytime soon.  Mayor Bloomberg can spend his entire fortune on gun control efforts and not effect much change.  Guns, millions of them, are with us to stay.

As a result, I've come to a sense of peace about the gun issue. This is the bed we've made for ourselves here in America, and we're just going to have to lie in it, for good or ill.  Or as the good Lord once put it, long before guns were invented, "Those who live by the sword die by the sword."  Jesus was definitely a realist about such matters.

And really, it's nice to have low expectations, because then it's hard to be disappointed.
Posted by Carl Lindquist at 8:45 AM