Syria has brought me back to my blog again.  Sorry for the absence, dear readers.  I've been lazy, I guess.  Actually, I've been doing a lot of Facebook posting of things I would normally have put on here, but it's easier and quicker to post them on FB.  However, what I CAN'T do there is to tag my posts so that I can quickly refer and link to them in the future.  So I'm going to try to be better about posting here more.

Let me begin by saying that I'm glad Barack Obama is president, instead of those other guys that he ran against in the last two elections.  Either of them would, I believe, have us already bombing away in Syria (and possibly also Iran).  And the odds are that we would also have 'boots on the ground' as well, in the form of advisers and 'special-ops' at least. 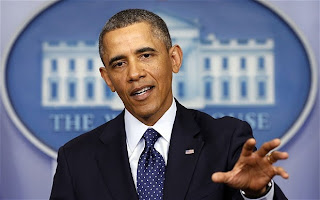 Hell, we probably already have advisers and special ops teams on the ground in Syria, not to speak of CIA operatives.  Does anyone really doubt that, given the way we operate in the world?

Even so, and perhaps despite that, Obama does undoubtedly brings a certain prudence and caution to foreign policy, which I appreciate immensely given the alternatives.  The media--not to speak of the foreign policy establishment--may find that aspect of him irritating, given how reticent and careful he is.  But I love it.

Since the beginning of this Syrian crisis, I have been very skeptical of our proposed plan for a 'military strike'.  There's a lot of reasons for that, which I really can't go into now, but I can probably summarize my position by saying that I am just really sick and tired of American intervention in the Middle East and the rest of the world.

I was dubious of American interventionism before 9/11, but everything that has happened since that fateful day has just about driven me crazy.  And what has been accomplished?  Nothing, and worse than nothing.  We've killed a lot of people on all sides, wasted a lot of increasingly scarce resources, and ignored a lot of other problems.  Oh, and we've made a lot of weapons manufacturers and private equity companies very rich, too (which of course is a big reason these wars go on and on).

What's been very pleasant to behold is how sick of it all the American people are as well.  Now, granted, some of the negative polling on the proposed Syrian intervention is a result of sheer Obama-contempt.  But I also believe that a good portion of it, particularly on the Democratic side, is a weariness with our, as someone once put it, going abroad searching for dragons to slay.  As Andrew Sullivan put it so memorably on his blog The Dish the other day, "Why do the citizens of Ohio have to take a position on whether the Alawites or the Sunnis should run a crumbling French colonial remnant?"

Excellent question, Andrew.  Now, I am not an 'isolationist', nor is Andrew Sullivan.  I just want our foreign and military policy to be more modest, humble, cautious, and careful.  With a few notable exceptions (Afghanistan and Libya), this is the way President Obama has handled things.  And it looks like Syria may turn out that way as well.

Keep it up, Mr. President (the caution and prudence, that is) and maybe before too long, you'll have actually earned the right to own that Nobel Peace Prize.
Posted by Carl Lindquist at 12:04 PM