Putin and the American Right

It's so amusing to watch the right-wing in this country grind and gnash their teeth over Ukraine.  They can't seem to decide whether it is Obama or Putin that they hate more. 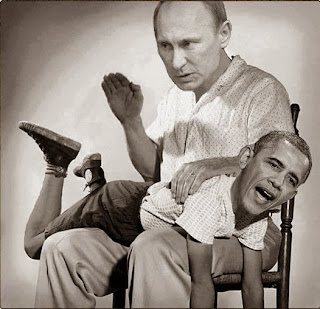 Actually, it's quite clear to me.  They loathe Obama much more than Putin.  In fact, I would go so far as to say that they almost admire Putin for his strength, his cunning, his willingness to defend his country's interests (as he sees it) in the face of critics all around the world.  (Take note of the picture--I found this on a right-winger's FB page.)  Of course, they wouldn't want the 'Russian' Putin here, but then again, they wouldn't at all mind an American 'Putin', eg Dick Cheney.

Frankly, the American right-wing (eg Sarah Palin) couldn't care less about Ukraine....many of them know nothing about it, its history, culture, religion, politics.  (Those who do and also have some truely libertarian views, like Rand Paul, actually agree or at least sympathize with Obama's caution on the issue of Ukraine.)

All they know is that this is a great opportunity to lash out--once again--at the man they truly despise....President Barack Obama.  How delicious!