Here are some possible reasons that younger voters don't seem to fear the term 'socialism' when uttered by Bernie Sanders (or, more likely, interviewers asking him questions, since Sanders really doesn't use the word himself).... 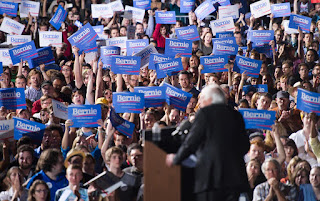 First, most young people are, well, young enough to not really have been traumatized by the Cold War between the US and the USSR.  In fact, most of them came of age after the collapse of the Soviet Union, and what little they do know about Communism must seem like ancient history to them.  'Socialism' is not really a dirty word to them and certainly doesn't seem to conjure up nightmare visions of gulags and secret police.

Second, what young people know of our vaunted capitalistic system hasn't exactly filled them with confidence in the glories of free enterprise.  To be more specific, they have lived through two rather difficult economic crises, the Internet bust in 2000 and the far more serious Financial Crash of 2008. The Great Recession of 2008 is still not over really and has left millions of folks struggling with unemployment, lower wages, inadequate retirement savings, and uncertain expectations for the future.  Europe has struggled as well, with the Eurozone struggling to hang together.  Meanwhile China (until very recently) has been economically growing like crazy, under a Communist Party, of all things!

Third, young people don't know what the future holds.  Climate change is something that most of them believe in, and it fills them with dread as they see it happening before their eyes.  And most of them (unless they work for government or have gotten rich in Silicon Valley) don't know how to both have a decent standard of living and save for their retirement.  Pensions such as my generation knew them are mostly a thing of the past (again, except in some government jobs), and figuring out how to replace them with 401-K accounts, etc. is definitely not easy.  So the safety net of Social Security, Medicare, and other 'socialist' type government programs begin to look a lot better for a providing a little security in their hoped-for old age.

Fourth, young people these days travel all around the world.  They've been to Europe, they've been to the 'Third World', they've been to Asia, and these experiences have taught them that, while the US is a good country, there are plenty of other good countries and good cultures that have different economic and political systems that can work just as good as ours.  Young people today don't fear differences or diversity, they seek it out.

So, for these reasons (and probably others as well), young people don't fear the idea of socialism.  Therefore, many of them are being drawn to the political egalitarian idealism, the conviction, and authenticity of Bernie Sanders.
Posted by Carl Lindquist at 11:14 PM