Donald Trump keeps surprising us, just like a wild card should.  Just yesterday, he got everyone stirred up over his contretemps with Jeb Bush, concerning 9/11 and whether Jeb's brother 'kept us safe'.  In the news media (or at least those things I saw), Trump again got the better of his political opponent.

This has been Trump's pattern so far as a Presidential candidate.  When he counter-punches a competitor's comment, he either knocks them down or says something so outrageous and funny that it's entertaining and you almost don't take it seriously.  Either way he comes out on top.

This man is definitely sui generis, unlike any other politician that I can remember in my life. 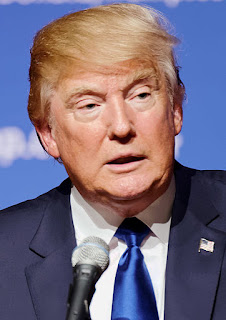 Now, 4 months later and he's on top of the Republican polls, where he's been since the beginning.

Donald Trump is stirring the pot like no one else has in a long time.  Oh yes, there have been the 'flash in the pan' Republicans, starting back in 2012, who rose for a couple of days or weeks to the top of the pile and then shrunk back down out of sight.  Just off the top of my head, you had Michelle Bachmann, Rick Perry, Herman Cain, Newt Gingrich, Rick Santorum, and probably others as well.  All the while this was going on, Mitt Romney was hovering at the number 2 spot just biding his time.

It looked like the same thing was going to happen this year, and to some extent it has.  Scott Walker, Jeb Bush, Rand Paul, John Kasich, Ted Cruz, Mike Huckabee, Carly Fiorina, Marco Rubio, Chris Christie, and at the present moment, Ben Carson, have all their moments of glory and spotlight, when it looked like they might be capable of moving into the top spot.

But only Donald Trump has been number one and stayed number one, contrary to all the political pundits.  Trump is giving them, one and all, fits.  And just the other day, on FOX News Sunday, the host Chris Wallace made what was almost a confession when he said something like "I think this guy can win the nomination."  And that kind of remark and admission began to heard all other the TV and the internet.

So what to make of this Trump phenomenon?

While his critics love to make fun of him as a 'reality TV star' or as a 'clown' or a dozen other derogatory names, the reality is that Donald Trump has a lot of personal attributes that make him a formidable political candidate.  Let me list a few.

He's fabulously rich, first of all.  He doesn't need to beg and scrap for money, like the other candidates do. And so while the others are out doing fund raisers or calling rich donors on the phone, he's doing public rallies and forums, or relaxing at home (at one of his dozens of properties), tweeting out responses to various pundits or opponents.  All of which gets him far more media attention than any of the others.

Then he is both smart and fast on his feet.  He can spar verbally with anyone and usually comes out on top.  He is entertaining and funny, as I mentioned earlier.  He is, most definitely, high-energy!  In these things, he reminds me of the boxer Mohammad Ali.  All of which is a winning combination in this media and celebrity age.

Trump knows the business world and, surprisingly, he knows the political world pretty well too.  Perfect example of this, he boasts about being invited to the wedding of Bill and Hillary's daughter.  Or he talks about lobbying Jeb Bush down in Florida when he was governor.  In other words, he has run for decades in the elite circles of New York, the US, and the entire world really, and he knows how it all works.  And he doesn't hesitate to talk about it openly and honestly in interviews and debates.

Trump is candid and outspoken, willing to be both frank and plain-spoken in his comments.  People like that, and in general will give such a candidate a lot of latitude to say outrageous things.  Trump has made any number of statements that might have doomed the average candidate, such as his 'McCain not a hero' remark, or his early statements on immigration.  But he remains on top.

Donald Trump is basically a pragmatist, not an ideologue.  And that, in the Republican field of candidates, is a most refreshing thing.  I think that it makes him appealing to a certain niche of the party, plus also attracts independent voters.  Americans historically like pragmatists in general (which could well be Bernie Sanders' undoing, for example, in the Democratic Party).

Let me end this here, because this post is going on too long, and I'll have further opportunities to comment on Trump as this campaign season goes along.  Clearly Trump has his problems and drawbacks that he'll have to overcome.

But I have to say, Trump has been such a wild and winning card in this political season, that he's upsetting everyone's conventional wisdom as to what is going to happen.  This is going to be interesting!
Posted by Carl Lindquist at 9:35 AM