Why Hasn't the ISIS 'State' Been Crushed?

What's the problem with crushing ISIS? Why hasn't that happened already, given how extreme and brutal they clearly are? 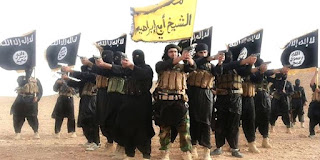 Part of the problem, of course, is that, after our Iraq debacle along with our continuing Afghani war, the United States is just not much interested in mounting the kind of infantry assault that it would require to dislodge and defeat the ISIS forces. ISIS controls two large cities, Mosul and Raqqa, that will require more than just air attacks but Army and Marine troops, numbering in the tens of thousands, maybe more.

But here's the larger problem. The US has been, for years now, more interested in overthrowing the reigning government of Syria than in fighting ISIS. And this is true of the primary US allies in the region: Turkey, Saudi Arabia, and Israel. They collectively seem to view Iran and the Lebanese Hezbollah, along with Syria, as the major enemy, not ISIS. It almost seems like they believe that once Assad is overthrown and the Iranians pushed back, then that will be the time to deal with ISIS.

So, with all the talk about an anti-ISIS coalition, very little has actually been done about ISIS over the last two years.

And then, along comes the Russians. It was their entry into the Syrian civil war that has truly changed everything. Long time allies of the Syrian government, the Russians have brought their considerable military machine (especially air power) to the aid of the Syrians, and in the process has hit all of the rebel Islamist groups in Syria, including ISIS.

I think it was this that has caused ISIS to lash out in ways they haven't before. For the first time, they see themselves threatened in a truly substantial way, not by the US but by the Russians and a reinvigorated Syrian army, along with their Iranian and Hezbollah allies. Hence the downed Russian airliner, and now, an attack on France (who admittedly has been bombing them recently).

Could ISIS be defeated by a grand coalition of Russia AND the US, Iran And Saudi Arabia, Iraq AND Turkey? I have no doubt about it. But getting all of these countries to overcome the overarching regional Shia-Sunni conflict, along with the efforts to overthrow Assad in Syria in order to focus on defeating ISIS? Ah, that's the problem.
Posted by Carl Lindquist at 6:42 PM

Email ThisBlogThis!Share to TwitterShare to FacebookShare to Pinterest
Labels: ISIS