If Sunday's news shows are any indication, the Washington/New York Establishment--both liberal and conservative--is freaking out about the looming Trump conquest of the Republican nomination. 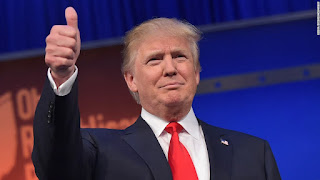 Whether it was Fox News Sunday--with conservatives George Will, Karl Rove, and Juan Williams (who's probably more centrist)-- or NBC's Meet the Press, with their reliable stable of liberal commentators, there was near unanimous head-shaking and psychological denial about the Donald.  'How could this be happening?' seemed to be the consensus position among these long-time denizens of the main stream media.

The only stable of media commentators that has come anywhere near close to foreseeing this outcome is that found on the Morning Joe show on MSNBC.  But they have also been on the receiving end of significant criticism for being in the tank with Trump, when in fact, they are the only group of liberals and conservatives willing to openly discuss Trump's stunning rise since last summer, as well as try and understand what it is out there in country that could be causing this.

The current conventional wisdom this week among the Establishment, both Left and Right, seems to be that, yes, the Donald will most likely win the Republican nomination.  But he will also most likely go down in flames in the general election at the hands of Hillary Clinton.  He can't possibly win, given the current negative attitudes toward him in the country at large.

My view is different.  I have a sneaking suspicion that Trump COULD actually win the election this fall.

Why do I say this?  Because Donald Trump is a veritable force of nature, something that we haven't seen in a long time in this country.  Because a great majority of the American people are fed up with 'politics as usual'.  Because a majority of the American people want to see less military intervention overseas and more attention paid to the needs of this country.  And because once the Republican Party regains a general semblance of unity (which almost certainly will happen very quickly) and turns their sights on the Democrats and Hillary, this race is going to tighten up and become very competitive.

I am by no means predicting or desiring a Trump victory, because the Hillary Clinton political machine is extremely formidable.  And the Democratic Party has an amazing national coalition with which to approach the 2016 election.

What I am saying here is that it would be a huge mistake, and I do mean hhhuuuugggeee, to underestimate Donald Trump.  There are forces here beneath the surface that we don't understand and cannot predict.

Posted by Carl Lindquist at 1:33 PM