As to the current contretemps regarding Donald Trump and Pope Francis, let me first say that I have no problem with countries wanting to control their borders.

I remember riding on the train in Europe from Milan to Zurich about eight years ago and a stern-looking Swiss policeman coming down the aisle checking passports, including ours. It didn't bother or offend me that the Swiss wanted to be sure who was entering their country. That's completely understandable, and it's the same with every other country, including our own. 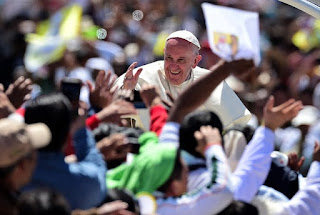 Of course, the US is uniquely an immigrant society, including six of my eight great grandparents from Sweden. But it still must be done in accordance with US law, which has changed over the centuries of our history, waxing and waning with regard to how much immigration is allowed.

Furthermore, immigration into America is and has been VERY controlled for folks who don't sneak in illegally. A couple of years ago, I was trying to help a young Swedish cousin of mine obtain a work permit to live in the US for a couple of years, so I went to our local Congressman's office (Howard Coble) to see what could be done. It clearly was going to be a long, difficult process to make that happen, so it didn't happen, which of course disappointed me. But I wasn't about to advise my cousin to skirt the law and try to enter illegally.

So, I say let's work this immigration situation out in a political deal between the Congress and the President and in the process make sure that persons entering/living in the US are doing so in accordance with the law.

As for the Pope said, having just listened to a video of him making the remarks about Trump in a language other than English, I want to think that something didn't come across in the translation and that he wasn't making the statement as it is currently being translated. In other words, I'm going to give Pope Francis the benefit of the doubt on this for now, admiring him as I do.

Yes, the Pope is very liberal on immigration, by which I mean that he supports treating immigrants and refugees in a very loving and merciful way. But at the same time, I tend to believe that it would out of character for him to judge Trump to not be a Christian in this matter. That doesn't sound like something he would say. So that's where I am for now.
Posted by Carl Lindquist at 10:32 AM