On The Wikileaks Emails

With regard to the Wikileaks emails and the alleged Russian hacking of the election, here are some of my thoughts.

First, I always assume that all the world's major powers are conducting espionage and 'cyber-warfare' against each other all the time, to the best of their ability and in their own self-determined national interest.  That's just the nature of international politics.  First and foremost among those powers is the United States, China, and Russia.   But they are joined by many others, including the U.K., France, Germany, Israel, Iran, and so on. 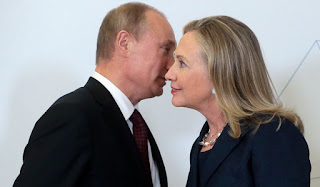 Second, I'm not sure why it should be so surprising to anyone that Russia may have an interest in 'interfering' in our election.  We have certainly not hesitated to 'interfere' in their political system since the end of WWII, and that continued in a even more enhanced way after the fall of the Soviet Union in the 1990s.

The best accounting of this US involvement in Russian politics that I've read is by Stephen Cohen, long-time professor of Russian History at, first, Princeton and now at NYU, both in his numerous articles for The Nation magazine and in his books, esp. 'Failed Crusade: America and the Tragedy of Post-Communist Russia'.  What he shows is how extensive (and counterproductive!) our 'democracy-promotion' efforts in Russia have been in the last 25 years, actually causing the majority of Russians to move from a pro-US position to an anti-US one over the decade of the 90s and into the new century.  Add to this the efforts of the US to push the NATO military alliance to the borders of Russia, and you have all the ingredients necessary for a new and very dangerous Cold War, which is what Cohen says is going on now.

Furthermore, we conduct espionage and influence campaigns on our own allies, for God's sake.  In Germany in 2013, the US was caught wiretapping the phone calls of Chancellor Angela Merkel.  Israel does it to us all the time, and I assume we do it to them.  And Russia and China do it to all of the above.  It's just the way the real world works.

My sense of this recent post-election contretemps is that no one 'in the know' is really shocked about all this, except for some gullible Americans.   And that of course is the whole point, isn't it?  Keep the outrage and resentment about the recent election churning.

Third, why should the recent pronouncement of Messrs. Comey, Brennan, Rogers, and Clapper be considered as if it were objective, non-partisan, and, well, infallible?  If I remembered correctly, the Clintons were as recently as a few weeks ago blaming FBI Director James Comey for Hillary's loss.  I guess they don't figure that he is so infallible.  And wasn't DNI Director James Clapper being considered for perjury charges for having lied to Congress about NSA bulk data collection from Americans just a few years ago?  And isn't the CIA widely considered to be the private army of the President, with its director being under the direct control of the President and no one else?  Why would anyone necessarily think that CIA Director Brennan is totally and completely impartial when it comes to this very partisan issue?  I don't.

I for one will be very interested to see how the assessment of all this changes when Trump's people take over.  If they have a different take, then I guess it shows that the leaders of the Intelligence Community can't always be taken as totally objective, infallible, and non-partisan.  Which is what I happen to think now.

Fourth, for what it's worth (and I'm not sure how much it is), Julian Assange, the head of Wikileaks, has said that it was not the Russians who gave Wikileaks the Podesta emails.  And again, for what it's worth, it doesn't look to me like it would be all that difficult to have hacked Podesta's emails....or Clinton's for that matter, given she had her private server in her bathroom at home.  With such nonchalance and indifference to cyber security, why give the Russians any credit at all for having 'hacked' these emails?  It probably could have been any reasonably talented teen computer nerd of any nationality.

And finally, the Wikileaks emails, wherever they came from, were not the reason Hillary lost this election.  There were any number of reasons more important, starting with the fact that Hillary was just a really lousy and unpopular candidate.

In any case, the Wikileak emails, none of which by the way have been refuted or denied, just added a little pizzazz to the excruciating spectacle of the 2016 Presidential Election.  Indeed, far from being misinformation of any kind, the Wikileak emails were just a tiny, transparent window onto the actual operations of the Democratic party and the Clinton Campaign.  And it wasn't very pretty at all.  But who ever said democracy was pretty and neat, instead of ugly and messy?
Posted by Carl Lindquist at 1:12 PM