Now that Donald Trump has received the necessary Electoral College votes to become President, it may be appropriate to hand out a report card on his first 5 weeks of transition.

I voted for Trump, as I wrote here the day before the election, much to the consternation of many of my family and friends.  But I did it because I believed that Trump was not the crazy, mindless demogogue and bigot that the Clinton campaign and much of the media portrayed him to be.  And because there were quite a few issues that he was addressing (or might address) that I thought to be very important to our future, important enough to sustain the 'slings and arrows' of outrage from my family.  Obviously, I could be wrong about Trump, so I've watched with considerable interest and (at least some) anxiety.

So how are things turning out, now that we've watched Trump begin his transition to the Presidency?

The first thing to consider is his pick for the White House chief of staff position.  Trump had already picked the well-thought-of Mike Pence as his VP, a widely applauded choice in terms of his political experience, intelligence, and overall conservative philosophy.  Now, he selected the head of the RNC, Reince Priebus, who knows everybody in the Republican Party, to be his primary assistant in the Oval Office.  A wise way to start the transition, without a doubt, because this gives you two experienced and conservative Republican professionals right next to him all the time.  For this he gets from me a grade of A+.

The second thing to consider is Trump's choice for Secretary of Defense, certainly one of the most important of the Cabinet positions.  In a very (and unusually) public process conducted in Trump Tower in NYC, Trump finally settled on retired Marine General James 'Mad Dog' Mattis.  This selection has been praised across the board as excellent.  Another A+. 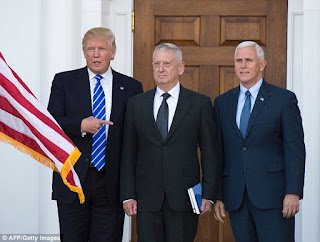 Trump's choice for CIA Director is congressman Mike Pompeo, and it is (like the others) a widely praised selection.  Homeland Security will be led by universally admired General John Kelly.  His UN Ambassador nominee will be Nicky Haley, the very capable governor of South Carolina and the daughter of Sikh immigrants from India.  All of which earns Trump an  A+.

One of the most important Cabinet positions is, of course, Secretary of State, and for that Trump has picked Exxon CEO Rex Tillerson.  This choice has been a bit more controversial, primarily because of the recent sensitivities over our relationship with Russia, and Tillerson has a long-standing relationship with Putin because of the Russian oil industry.  However, assuming the second-in-charge under Tillerson is an knowledgeable and experienced State Department pro, then I think Tillerson is an excellent choice, given his extensive knowledge of the world and the world's leaders, and especially in terms of working out a more cooperative and less dangerous relationship with Russia.  I give Tillerson an A+.

I like Jeff Sessions at the Attorney General position, and give him an A+.  This will be controversial because of a statement of his that will be dredged of from 40 years ago, but he should be approved because of his long Senate service and because of his past experience.

When it comes to all the domestic Cabinet positions, they appear to me to be conservative choices who will be in synch with the Republican-controlled Senate and House.  I don't necessarily agree with all their positions, but they seem to be capable people who will definitely bring change to Washington.  And that is probably a good thing, although continued discussion of many of the relevant issues is also a good thing.  I give Trump's domestic picks for the Cabinet a B.

Oddly enough, Trump has managed to sideline three of his earliest and most devoted supporters: Chris Christie, Rudy Giuliani, and Newt Gingrich.  All three could have done a good job in certain positions, but for different reasons, either were not chosen or themselves chose not to serve.  Probably just as well.

Donald Trump decided to do a 'thank you' tour of the country, especially the states that he needed to win.  It has had the effect of keeping his base on board, while the MSM, along with the Democrats and the Left in general, continue to hammer him.  It also seems to energize him and give him a break from the tedium of the transition.  Probably a good idea.  B.

The one thing I wish (along with most people, according to polls) that Trump would stop is his tweeting.  It is undignified, dangerous, and unnecessary.  For that, and that alone, I give him an F.

All in all, I am pleased (and relieved) with the way the Trump Transition is going (except for the tweets).  I haven't yet mentioned his (to all appearances) good relationship with President Obama.

Contrast all this with the disarray in the Clinton campaign and the Democratic Party, their contesting of the election through protests and sundry statements, their refusal to take responsibility for their loss, and their pushing of scapegoats.  Compared to all this, the Trump Transition looks like a well-oiled machine!  This is indeed an auspicious sign for the future.