Anti-Semitism.  A subject that, unfortunately, has been recently politicized (against you know who) but still deserves comment, especially with these recent damnable Jewish cemetery desecrations.

Having spent last summer visiting many very old cemeteries in New England for Mary Beth's ancestry research, I can tell you that few things outrage me more, as I get older, than cemetery vandalism and desecration. To me cemeteries are a sacred place, no less so than a holy place of worship. And to damage or desecrate these places is a terrible, degenerate thing. 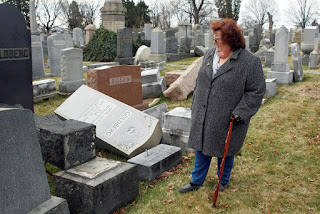 I am something of a amateur history buff, particularly concerning WWII, and so I've read a considerable amount about Hitler, the rise of Nazism with its extreme form of anti-Semitism, and the consequent experience of the Holocaust.

Also, when I was preparing for my role as Tevye in 'Fiddler on the Roof' a few years ago, I did a study of Jewish life in Christian Europe over the last two millennia, along with the accompanying anti-Semitism.

Finally, in my research on Islam over the last 2 years or so, I looked at the Muslim views of Jews and the widespread anti-Semitism to be found in the Islamic world today.

So I think I can safely say that I know a thing or two about anti-Semitism, at least from an historical perspective.  Furthermore, I think I can make an assertion here without fear of contradiction that, aside from Israel, the United States is the least anti-Semitic country in the world today. As a ethnic and religious group, Jews are more welcome in America than anywhere else, again except for Israel, the Jewish homeland.

Of course, that hasn't always been the case. Prior to WWII and the Holocaust, Jews were somewhat frowned upon in American life, much like they were in Europe. Despite that, however, millions of Jews emigrated to the United States in the 19th and 20th centuries and made a life and a home here.  And since WWII, anti-Semitism has largely been pushed to those tiny nooks and crannies of American life where a few neo-Nazis hide away.

Of course, some of these critics are the same ones who were ready at the drop of a hat to call a good quarter of the US population (in the case of Hillary's 'deplorables') "racist, sexist, homophobic, xenophobic, Islamophobic--you name it".  (I'm actually surprised that she didn't add 'anti-Semitic' to her list, maybe because she knew it wouldn't sell?)

Speaking now as a (somewhat reluctant) Trump voter, I can honestly say that I have only run across one other Trump supporter whom I would consider to be anti-Semitic. It was a young man who we met on the plane flying out to Colorado a year ago January. Sitting next to us, we got a chance to talk about things, and though he clearly was a 'country boy' from rural North Carolina, he was very smart and amazingly well-read, particularly in theology, which surprised me greatly. (Incidentally, he was on his way out West with a few friends to do some big-game hunting of elk.)

When I got back home, I friended him on Facebook to continue our dialogue, which we did. And then, all of a sudden, a few months later last spring, I started seeing some videos show up on his FB wall that were clearly anti-Semitic, and almost crudely so. (He had become a Trump supporter by this time, though separately from what I was now seeing.) So I messaged him to inquire about what I was seeing, to make sure he understood what he was posting, to make sure he wasn't being hacked or something, and, frankly, to express my distress at what I was seeing.

Turns out that indeed he had been posting the anti-Semitic videos and that he had been sucked into the anti-Semitic ideology they were pushing (and believe me, you know it when you see it, it's so obvious).   I was shocked to put it mildly and tried to persuade him that this was a very wrong direction to go. But that didn't work, for whatever reason, and so I told him that I could not be FB friends with a dedicated anti-Semite. So we parted ways and I've lost touch with him.

All this to say, I KNOW that there are susceptible individuals out there who can get sucked into an extremist ideology like neo-Nazism, and who can also support a conservative political candidate like Trump. BUT if my personal experience is any guide, these kind of people are very far and few between in America.

Whoever is committing these anti-Semitic attacks on Jewish cemeteries and synagogues needs to be caught and prosecuted. I hope law enforcement is committing resources to track them down.

Clearly, there are extremists on the Left--as we've seen with a number of 'black-bloc' anarchist riots--and extremists on the Right. Both extremes need to be condemned and corralled.  What we don't need to do is politicize these extremists and use them as weapons in our political and media campaigns against our public officials.