On the Comparison of Trump and Hitler

The picture below shows some of my collection of books on Hitler, the Nazis, and the Second World War. I think it's a pretty good collection, considering I'm neither a scholar on Adolf Hitler nor an historian of the Nazi era in German history.  Though you may not be able to make out the individual titles, they include several outstanding biographies of the Führer, along with an old copy of his primary manifesto, Mein Kampf. 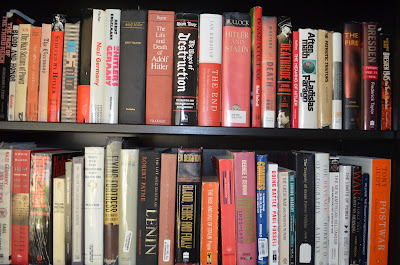 I started gathering and reading these books decades ago, of course, but my interest definitely peaked after my father, Lennart Lindquist, died in 1998. At that point, my appreciation of what Dad had done in WWII--piloting a B-17 on 35 bombing missions over Nazi Germany--grew immensely, as did my interest in learning more about Hitler and his Nazis, the target of my Dad's 500 lb. bombs.  So I committed myself to learning as much as I can about those topics (again as an amateur), along with a similar interest in Communism and the Soviet Union, the other great totalitarian threat of the 20th Century.

As I mentioned a few days ago, all this talk of our new President being a new American Hitler has led me back into rereading some of the books on that shelf.

Which leads me to say this: anyone who thinks there is any significant resemblance between Hitler and the Nazis on the one hand, and Trump and the Republicans, on the other, is talking sheer nonsense. And not only is it historical and political nonsense, it also is symptomatic of a political hysteria, an hysteria on the liberal-left which is not only quite offensive to everyone who ended up voting for the Republicans this year, but in its own extreme way, it is very dangerous to the country.

Though I really wouldn't need to do this in a country that had even a rudimentary understanding of American and world history, since that seems clearly not to be the case, let me share just a few of the distinctions and differences between Herr Hitler and our President to make the basic point here.

First, are there any similarities?  Well, yes, it is true that both men have German-sounding names, given that they both are of German ancestry:  Hitler/Trump.  They both abstain(ed) from alcohol and tobacco.  They both were interested in buildings: designing and building them (Hitler loved talking architecture with Albert Speer, his chief architect).  They both were effective public speakers (much like Bill Clinton and Barack Obama, for that matter).  And they both managed to become the primary leaders of their respective countries, through a legitimate electoral process.  That's about it, in terms of what they might have in common, it seems to me.

Oh, and they both wrote a best-selling book, which described their larger goals.  Hitler wrote Mein Kampf, and Trump wrote The Art of the Deal.

In Mein Kampf, written in the early 1920s (about a decade or so before he gained power), Hitler described the basic elements of his worldview: Aryan Supremacy (his Racialist Doctrine of the Master Race), the sub-human and even Satanic nature of the Jews, and the need for the German people to conquer the lands to the East (slavic lands including Russia) in order to achieve continental, and eventually world, domination.

All this was to be achieved by eliminating parliamentary democracy in Germany and consolidating all national power--political, economic, and cultural--in the Nazi party.  And once Hitler gained power as Chancellor on January 30, 1933, over the next 12 years, he carried out the goals of his vision almost without deviation.  Fortunately for us, he was only defeated by the combined armed forces of the United States, Great Britain, and the Soviet Union, (including my brave father). 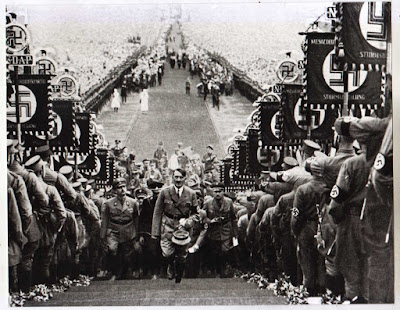 Now, Donald Trump's book, The Art of the Deal, gives you an insight into his life goals.  Which has been to make great business deals, to build great buildings, and get rich.  That's about it.  And he was successful in fulfilling his goals in life.

While Trump talked occasionally about running for President over the years, it never seemed to be a serious ambition, until, it is said, President Obama goaded him into it by making fun of him in public, at the 2011 White House Correspondents dinner.  And even then, the campaign seemed totally quixotic until, well, against all odds he actually won.  And then half of America lost their minds.

Actually, I think I've made my point.  If you want to read more about Hitler and the Nazis, you can find dozens of biographies/histories around.  I recommend a very readable biography by John Toland, entitled simply Adolph Hitler, but there are others by Ian Kershaw, Alan Bullock, etc.

Or, on the other hand, if you want to continue to listen to political fools like Ashley Judd, with her moronic rantings about Trump's Nazi inclinations, well, it truly is a free country where a person can get up onstage within a mile or so of the President and make fun of him, and there are simply no consequences.  Madonna can even ruminate about wanting to blow up the White House, and yet no one is sent to jail, beat up, or put in a concentration camp.  God bless America.

Now, obviously none of what I have said here is meant to say that we all can't criticize Trump for his words and actions as President.  Of course we can, and I have routinely criticized every President, including our current one.  That's normal politics and that's good.  Free speech and assembly, checks and balances, frequent elections: all that good stuff that we all love about this stable constitutional republic we call the United States of America.

But the kind of apocalyptic rhetoric I'm seeing from the (hopefully) loyal opposition in our country is out of control.  People, get a grip, please.

Posted by Carl Lindquist at 3:54 PM