A Sad Spectacle on Capitol Hill

So, a few thoughts about the events of the last couple of days.

I strongly condemn the 'storming' of the Capitol building on Wednesday by the crowd of mostly young and middle-aged white men, which quickly turned into an unruly, and at times violent, mob.  (For the record, I don't know anyone among the Trump supporters I'm familiar with who resembles, say, Buffalo Man, the crazy shirtless dude in the horns and furs.  Except maybe my cousin Randy....) 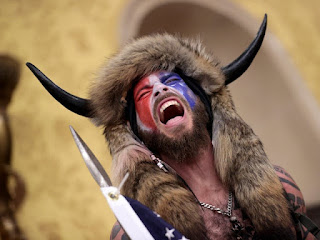 The whole spectacle (the riot, not the peaceful rally) was a pathetic disgrace, and I reject it utterly.  As do most Republicans, conservatives, and Trump supporters, at least the ones I'm familiar with.
As far as I'm concerned, every person who joined in that lawless, testosterone-fueled escapade (not an 'insurrection' or 'coup', for god's sake) should be fined; every person who fought with Capitol police or damaged or destroyed property should be arrested and prosecuted, and their faces put in the newspaper for shaming purposes.  Such lawless behavior should not go unpunished if we are to have a decent society worth living in.  (And that of course applies as well to all the riots of the last 7 months connected with the BLM/Antifa protests.)
As for the tragic shooting death of Ashli Babbitt just outside the House Chambers by an armed officer, one can feel very sorry for her and her family, while at the same time acknowledging that when you participate in a lawless action, which includes confronting armed law enforcement, you run the real risk of something going very wrong and very violent.  And in this case, it did.  Sorry, that's just the way I see it.
I also reject the claim that this mob tragedy captures the essence of the populist movement that has formed around Trump the last four years.  It doesn't.  In fact, it's diametrically opposed to what we stand for.  Law and order, respect for law enforcement, pride in our traditional American institutions and monuments, including the Congress and the US Capitol--that is a big part of what we stand for.  Not this disgusting display of lawlessness, disorder, and anarchy at the very heart of our national government.
After years now of defending the many good things that Trump and his administration has been able to do, even in the face of tremendous opposition from the Democrats and the Left, I'm bitter and dismayed by what has happened in their waning days in office.
As for President Trump--as Kim Strassel put it in her WSJ column today, "A politician has to work hard to destroy a legacy and a future in a single day. President Donald J. Trump managed it."  Exactly.  The man has worn out his welcome, even among many of his supporters.
After what I consider three pretty good years, (which I'll continue to defend in the main), Trump has been a disaster since last March when the Pandemic hit, screwing up at every turn, ending in this.  He has disgraced himself, his movement, his office by his behavior, especially over the last few weeks.  He should resign--today--and turn his Presidential authority over to VP Pence, who is a good man and who doesn't deserve the treatment he has received from Trump or the media.  But, like Bill Clinton before him, who also disgraced the office of President by his sexual excesses, Trump won't resign, because they're both too narcissistic and self-centered to do the honorable thing.  Unlike Bill Clinton, however, Trump is not going to have the Media or a political party to defend him in his post-Presidency.  He's toast.
None of this excuses the awful behavior of the Democrats or the Media over the last four years, but we'll save that issue for another day.  So, to quote one of the wisest, most honorable people I know (Forrest Gump), that's all I got to say about that.
Posted by Carl Lindquist at 12:25 PM