Joe Biden and His Hawkish Advisors

Assuming that Joe Biden becomes President on January 20 (which at this point I do), what will be the likely shape of his foreign and defense policy?  As Teyve in Fiddler on the Roof put it, that I can tell you in one word. 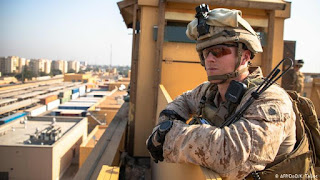 Why do I think that?  Won't Joe Biden simply be more cooperative and friendly to other nations and their leaders than Trump?  Isn't Uncle Joe just a nice guy who wants to be friends with everyone?
It would be easy to think this way, but honestly you need to look behind the curtain to see the reality here.  Case in point: just look at what Republicans were ferociously anti-Trump, for example.  The biggest NeverTrumpers were largely so-called neo-conservative militant hawks like Bill Kristol, David Frum, Robert Kagen, Victoria Nuland, Bret Stephens, and Jennifer Rubin.  And of course we shouldn't forget John McCain, whose widow Cindy McCain endorsed Joe Biden in the recent campaign, thus possibly throwing Arizona into the Democratic column.

What did all of these people have in common?  They are all unanimously 'liberal interventionists', whose greatest desire is to militarily intervene wherever it is feasible to do so (and sometimes where it's not) in an effort to turn the entire globe into a 'liberal democracy'.  Sounds good, doesn't it, except that that turns out to be a recipe for endless war and military occupation.  Shades of Iraq 2003.

Believe me, with these folks in important positions in the Biden State and Defense Departments, our military will remain in all the places they currently reside, and they are likely to touch down in new places as well.  And the military-industrial complex will once again be pleased.

Perhaps you are one of those people who had been led by the unrelentingly anti-Trump Big Media to believe that Trump was a foolhardy hawk, ready to carelessly blow the world up with one of his crazy statements.  Sorry to disappoint you.  In fact, it's Joe Biden, whom Robert Gates, Secretary of Defense under both George W. Bush and Barack Obama, said had gotten every major foreign policy in his long career in government wrong.

In historical hindsight, I believe that Donald Trump's foreign policy will be largely seen as restrained, realistic, and effective in keeping us out of new wars.  Which is one of the reasons I voted for him in the first place.

Posted by Carl Lindquist at 9:07 AM