Can We Borrow The Queen?

Watching the British celebration of Queen Elizabeth's Diamond Jubilee has been an exercise akin to peering over the fence into the neighbor's backyard and wishing you were there.  The Brits have this institution called the Monarchy that, while having almost no real political power, has the ability to unite the vast majority of the British subjects into a seemingly happy, contented, flag-waving family. 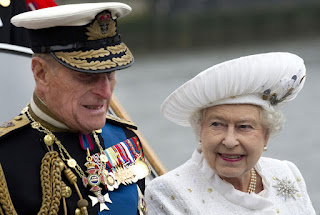 Now, of course, it's mostly an illusion, because the Brits are having the same economic and cultural problems as everyone else.  But it sure looks and feels good, doesn't it.

Do you think we might borrow the Queen for a little while here in America?

You see, the British developed this cool system where they have a symbolic 'head of state'--the Royalty--who symbolize the nation and all its cultural traditions and historical roots.  But the Monarchy has had no real political power for over 300 years--that lies in Parliament--so few people expect much of it.

The real political power lies in the 'head of government', which is the Prime Minister, representing the leading party in Parliament.  And it's here where people can either project their political love or hate, depending on their partisan ideologies and expectations.  It's there in Parliament where all the debating and yelling and ranting goes on.  In the royal palace, on the other hand, it's all sweetness and light.

A wonderful system you see, for producing both political pluralism and national unity.  For Americans, on the other hand, the problem is that we have combined the functions of the 'head of state' and the 'head of government' in the Presidency.  And that doesn't work very well, actually.

Case in point, Barack Obama.  When he tries to function as unifying 'head of state', there are those Republicans and conservatives out there who just can't overlook his role as 'head of government', and so they can't join in the festivities.

We try, oh yes we try. Take our State of the Union Address.  This is about as close as you come on an annual basis to something that unifies that countries.  Both political parties gather in the Congress to welcome the President, accompanied by the Supreme Court and other important national dignitaries.  And the President presents his speech.  But have you noticed recently how that's just not working so well?  It's become very partisan, with people yelling out things like 'You lie!'.

I suppose the last time the Presidency actually functioned semi-well as Head of State was during the first couple years of the Johnson Administration, when due to the shock of the JFK Assassination and the sheer dominance of LBJ himself, there was a sort of unity that resulted in major social advance, such as the Civil Rights Act and the passage of Medicare.  But that rapidly fell apart when the Vietnam War began to sour and the country rose up in protest and dismay.

Perhaps the year or so about 9/11 was somewhat unified as well, but that too fell apart when we rolled into Iraq.

Perhaps the armed forces function for Americans as our 'Head of State', because that seems to be when we're all supposed to stand and salute and weep?  Or is it the flag?

But nothing works for us like the Queen works for the British.  And so we just seem much more divided and fractured as a nation these days.

So, could we please borrow her Majesty for a little while?
Posted by Carl Lindquist at 11:38 AM