I was an avid reader of the National Review for about 15 years in the 80s and 90s.  For those of you not familar with this magazine, it was THE flagship conservative magazine for decades after its founding by William F. Buckley in 1955.  In the editorial staff and content of National Review, Buckley did his best to hold together a very fractious conservative movement, made up of anti-Communist hawks, conservative Catholics, evangelical Protestants, libertarians, and free-market business types. 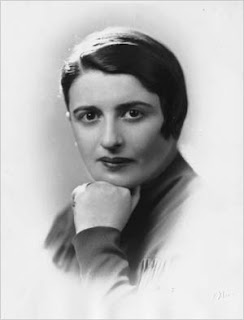 But there were certain 'conservatives' who Buckley did not try to hold within his coalition.  To the contrary, he saw certain groups on the Right as so radical and extreme in their ideological leanings as to be dangerous to true conservatism.  Two of those groups were the John Birch Society and the devotees centered about Ayn Rand.

Reading through a biography of William F. Buckley that I picked up recently at the wonderful St. Francis Episcopal Church booksale, I found the following description of his encounter with the Randians.  (This is particularly helpful, given the influence of Ayn Rand among today's conservative movement and Republican Party.)

[Whittaker] Chambers wrote irregularly for National Review, starting but not finishing many articles.  His columns on foreign policy were mediocre.  He was not so much interested in reiterating the threat of communism as in examining what he believed to be the spiritual crisis of the West.  His most impressive articles were a critique of Ayn Rand's didactic novel Atlas Shrugged and a defense of Alger Hiss' right to travel.  In both cases, he was trying to challenge the assumptions of his readers and fellow editors about the nature of conservatism.

Rand, a Russian émigré, had used her novels to proselytize for a philosophy of economic individualism that she called "objectivism," and she had assembled a devoted intellectual following.  On purely economic issues, she differed little from National Review, but unlike National Review's editors, who tried to balance their economic individualism with a traditional conservatism, she made her economic views the basis of a psychology and politics that extolled selfishness and damned religion.  Her movement's emblem was a gold brooch with a dollar sign, rather than a cross, dangling from it.  (The first time she had met Buckley, she had not edeared herself to him by remarking, "You are too intelligent to believe in God!")

Chambers, like the other National Review editors, had come to the Right as a counterrevolutionary idealist.  Like Schlamm and Burhnham he had no particular fondness for the rich.  He saw economic freedom and capitalist individualism not as a path to wealth, but as the antithesis of Communist totalitarianism.  Individualism was not good in itself, but only as a means to civic and religious virtue.  Chambers condemned objectivism as a cousin of Marxism.  "Randian man, like Marxian man, is made the center of a Godless world," Chambers wrote.

Rand and her followers were stung by Chambers' attack.  Rand's young disciple, economist Alan Greenspan, who later became President Gerlad Ford's chief economist [and the Fed chair under Bush, Clinton, and Bush], wrote Buckley, "This man is beneath contempt and I would not honor his 'review' of Ayn Rand's magnificent masterpiece by even commenting on it."  Rand herself complained aloud, "What would you expect from an ex-Communist writing in Buckley's Catholic magazine?"  She never talked to Buckley again and refused to enter any room in which he was present.

But Buckley was not moved by their protests.  For Buckley, Chambers' essay revealed a way to reconcile conservatism with the Catholic critique of laissez-faire capitalism.  Chambers had not demonstrated that individualism was wrong, but only that it was wrong if taken as an end in itself.  He applauded Chambers' attempt to "read Miss Rand right out of the conservative movement."  "Her exclusion from the conservative movement," he wrote later, "was, I am sure, in part the result of her desiccated philosophy's conclusive incompatibility with the conservative's emphasis on transcendence, intellectual and moral."

My thoughts exactly.  Wish you were still around, Mr. Buckley.
Posted by Carl Lindquist at 12:15 PM