Trump Is Not Hitler. He's Just From Queens, New York.

For the 100th time, Donald Trump is not Hitler, or even Mussolini. He's just a rich building contractor from Queens, New York. That explains a lot, when you think about it. 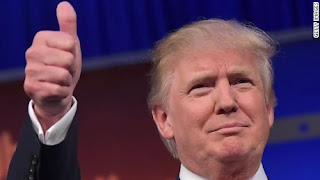 Trump is blunt. Trump is a fighter. Trump tells it like it is, using simple and often funny words. Trump is realistic about the world. Trump knows how to get things done. Trump works hard. Trump, in his own way, is extremely smart. Trump knows a lot about--and doesn't have much respect for--career politicians. Trump in fact has the ability to destroy political opponents with a single sentence (e.g. Jeb Bush is 'Low-Energy Jeb'). Trump respects--and will defend--ordinary Americans who work hard for a living. Trump doesn't care whether you're white, black, red, or orange. Trump has always hired talented women. Trump loves America and its heritage of freedom, and he wants it to control its own present and future. Trump respects the military and the police. Trump thinks the press is mostly blowing smoke. Trump is clearly not afraid of anyone.

Have I left anything out?
Posted by Carl Lindquist at 2:02 PM