The more I think about it, the more obvious it becomes.  Joe Biden (or whoever his handlers are) will pick Hillary Clinton to be his Vice-President, and she will gladly accept the nomination.  It makes perfect sense. 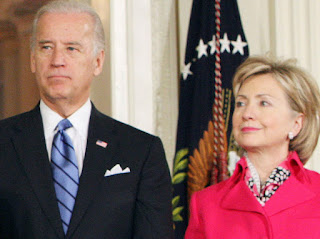 Is there anyone who is a better embodiment of the Establishment than HRC?  Of course not.

Uncle Joe (or better yet, Grandpa Joe) is going to need someone who everyone knows still has their wits about them.  And not only their wits, but their policy chops.  Neither of which Joe Biden has in abundance right now.

Furthermore, Hillary is clearly seeking revenge for her drubbing at the hands of the Bad Orange Man four years ago.  What a perfect way to possibly achieve that item on her bucket list!

And given what we're seeing in the ongoing mental deterioration of Joe Biden, it is entirely reasonable to expect that Hillary could find herself as President in the not too distance future, given what her position would be in the Presidential line of succession.  For that matter, once Joe is elected President and has a chance to fulfill his lifelong ambition, I don't think he really cares how long he serves after the first couple of years.  Really.  He's not all that crazy about actually BEING President, which is mind-numbingly hard and exhausting job.  I'd give him two years, max.  25th Amendment, you know.

Meanwhile, Kamala, Amy, Elizabeth, and hell, even Tulsi, can be installed in the cabinet:  Kamala as Attorney General, Amy as Secretary of HHS, Elizabeth as Treasury Secretary, and Tulsi as, let's see, how about Department of Homeland Security!

And of course, Mayor Pete can cut his teeth nationally as the new Secretary for Gender and Race!  Or more realistically, the Secretary of Education.

P.s.  Can you even imagine a Hillary Clinton/Mike Pence VP debate?!  That should be a real humdinger!

Posted by Carl Lindquist at 1:45 PM