Could the COVID-19 coronavirus epidemic prove to be the adversary that brings on Trump's defeat in the 2020 November election? 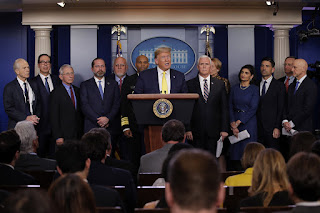 Up until about a week or two ago, it looked like President Trump might be cruising to a 2020 reelection victory.  It's still early, for sure, but it's becoming clearer every day that the political, economic, and social chaos brought on by the 'Wuhan Virus' could well prove to be the foe that Trump is simply unable to defeat.

One of the remarkable aspects of Trump's initial 2016 campaign and subsequent presidency has been his uncanny ability to ultimately vanquish any and all opponents.  Republicans, Democrats, prosecutors, media, foreign leaders/countries:  you name it, and Trump has triumphed over them over the last 3 years.

As if to continue that crazy winning streak in the final stretch to the fall election, the Democratic primaries has unbelievably ended up with Joe Biden and Bernie Sanders, two very old white men, as the remaining candidates for the nomination.  Can you think of anything that is more the antithesis of the modern Democratic Party?  TWO OLD WHITE MEN?  Really? 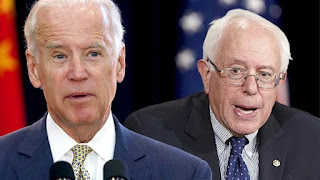 But the advent of COVID-19--the ultimate 'black swan' event--and the accompanying economic and political turmoil appears to have changed everything, and it would seem to be the conclusive test of our unusual, erratic, and unpredictable leader.

If Trump can somehow withstand this furious assault and still be reelected, then his 'reign' will begin to take on a legendary, if not mythological, character.  If not, his enemies--and they are many--will be very happy to send him into an ignominious exile, like Emperor Napoleon of old.

Being a pessimist by nature, I tend to think he won't succeed and will be defeated.  But I have been wrong before in this matter.  Trump's pattern until now has been to (mostly) surprise and amaze his supporters, while at the same time throwing his political detractors and opponents into paroxysms of anguish and despair.  So we shall see.
Posted by Carl Lindquist at 12:13 PM