Here are a few things I've learned the last 24 hours about Romney's pick of Paul Ryan.

1)  There is a sense that, within the Washington beltway, the race for President is now between Barack Obama and Mitt Romney's running mate, Paul Ryan.  In that sense, this could be a unique race in our history.  You think I exaggerate? 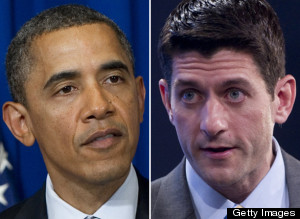 Romney is an outsider to the Republican Party, a loner among even Republican politicians, a mystery wrapped inside an enigma for most Americans.  Paul Ryan, on the other hand, has risen in a very short time to a position of incredible prestige within both the Republican Party AND the Conservative movement.  His views on fiscal matters are dominant within the Republican Party.  His budgets for the government have been passed overwhelmingly by the House Republicans.  He has become as good a symbol of what the Republican Party stands for in 2012 as anyone out there.

So while Romney has the formal power, it would seem that there is a new power behind the throne, who will wield a powerful scepter himself.

2)  Over the last three years, the relationship between Ryan and Obama has become more and more strained.  Initially, the two men seemed interested in pursuing a dialogue about their respective political perspectives, but especially in the last 18 months, things have turned sour.  According to the Ryan Lizza article in the New Yorker magazine, one particular event exacerbated the ill-will: an April 2011 speech at George Washington University by President Obama, in which he criticized Ryan's budget plans to his face, after having invited to come and sit in the front row.  After this humiliation, Ryan in turn discouraged any House compromises with Obama, including the now infamous Obama-Boehner 'Grand Bargain' proposal, that failed at the last minute after the Tea Party Republicans, led by Eric Cantor and Paul Ryan, refused to go along.

So, there appears to be some bad blood between Paul Ryan and Barack Obama, and that will only get worse, it would seem, in the heat of the forthcoming fall political season.  It isn't going to be pretty.

3)  Much has been (and will be) made of the ideological influence of Ayn Rand upon Paul Ryan.  Fair enough.  He did read, and was deeply influenced, by Atlas Shrugged, the primary ideological novel of Ayn Rand, and this thrust Ryan's thinking in a deeply individualistic and libertarian direction.  However, he has read deep and wide in the conservative movement pantheon of thinkers and illuminati, including Hayek, Friedman, and von Mises.  Furthermore, he cut his policy teeth with supply-sider Jack Kemp, who was probably his political godfather back in the 90s.  And we mustn't forget that Paul Ryan was and is a Roman Catholic, so that like Mitt Romney, the social influences of religion will remain a part of the mix.  So the intellectual influences on Ryan are much broader than just Ayn Rand (thank God), and for the Democrats/liberals to try and caricature Ryan as a 'Randian' is unlikely to work as a political weapon against him (though, Lord knows, they will try).
Posted by Carl Lindquist at 9:06 AM