I'm going to blame (or give credit to, whatever the case may be) my friend Tom for the following, because his wild enthusiasm for the recent movie 2016 Obama's America was the only reason that I bothered looking into this fellow Dinesh D'Souza, who is the brains behind it. 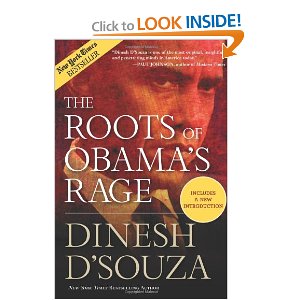 I was going to go see his movie at our local theatre, but then I didn't really want to spend my dollars that way, especially after I began to read online about the basic thesis of the movie.  So I kept looking on the internet, then went to the library to get one or more of D'Souza's books (2016 is based on the two most recent of his books, The Roots of Obama's Rage and Obama's America).

D'Souza seems to have concluded that America is in danger because President Obama is a dangerous person.  Why is Obama dangerous?  Well, let me quote his words, from the first of the already mentioned books:

"The most powerful country in the world is being governed according to the dreams of a Luo tribesman of the 1950s—a polygamist who abandoned his wives, drank himself into stupors, and bounced around on two iron legs (after his real legs had to be amputated because of a car crash caused by his drunk driving). This philandering, inebriated African socialist, who raged against the world for denying him the realization of his anti-colonial ambitions, is now setting the nation’s agenda through the reincarnation of his dreams in his son. The son is the one who is making it happen, but the son is, as he candidly admits, only living out his father’s dream. The invisible father provides the inspiration, and the son dutifully gets the job done. America today is being governed by a ghost."

Really, Dinesh?  Really?  Is that what you see when you look at the White House?  Funny, I don't see that at all, nor do a great majority of Americans, who still like and admire President Obama.  They don't like the progress he's making on the economy (I don't either), but that's an entirely different matter, isn't it.

So where did this otherwise sensible fellow Dinesh D'Souza come up with this quite novel theory?   I've taken the time to look at a few of D'Souza books and essays, and listened to a few of his online interviews.  He's got an interesting background: an immigrant from India around the age of 18, graduate of Dartmouth College, and a diligent worker in the rarified world of conservative think tanks, including Heritage, AEI, and Hoover--all the major ones.  (He also worked briefly in Reagan's White House.)  He is a Movement Conservative intellectual, without a doubt.  And presently, he works for Campus Crusade for Christ, as the President of their small Christian College in New York, King's College.

Most of what D'Souza had written prior to 2010 was unexceptional Movement Conservative in style and substance, the only unique thing about it being his interesting upbringing in India, which gives him a somewhat unusual perspective.  Namely, he believes in the benefits of British colonialism (see Chapter 2, "Two Cheers For Colonialism", What's So Great About America).

Speaking about his Indian grandfather, D'Souza wrote:  "The reason for our difference of perception [his grandfather's extreme dislike for colonialism] was that colonialism had been pretty bad for him, but pretty good for me....Colonialism was the transmission belt that brought to India the blessings of Western civilization.  It was a harsh regime for those who lived under it, to be sure.  My grandfather would have a hard time giving even one cheer for colonialism.  As for me, I cannot mange three, but I am quite willing to grant two.  So here it is: two cheers for colonialism!"  (pp. 56, 59)

Alright, Dinesh, let's talk here, just you and me.  I can see the point you're trying to make here.    You want to give some credit to the British for their fairly benign form of colonialism, as opposed to most other colonial powers like Spain, Portugal, Belgium, France, and Russia.  Fair enough.  But here's the thing.  That kind of thinking doesn't really work here in the U.S., you see, as opposed to your native India, because our entire way about thinking of politics and government is based on our own revolution against the British.  America has been, for over 200 years, anti-colonialist in its thinking and approach to the rest of the world.

In other words, Dinesh, we would EXPECT Barack Obama to be anticolonialist.  That's what it means to be American.  The last (and only) US President that I can think of who was not completely anticolonialist was Theodore Roosevelt (and possibly William McKinley, his predecessor), when we annexed the Philippines as our own 'colony' from Spain.  Before and after this, anticolonialism has been the American name of the game.  It is who we are: freedom and self-determination for all people.

So your far-fetched thesis, embodied in this slick movie 2016 Obama's America, that Obama is driven by the ghost of his absent father and of his other 'surrogate fathers' to destroy America because it is the great colonial hegemon in the current world, is simply ridiculous and absurd.  It's amateurish psychobabble, unworthy of someone who thinks of himself as a 'public intellectual.'

I'm disappointed in you, Dinesh.  You do some decent writing, particularly on religious matters, and I want to give you credit for that.  But with this viciously personal, partisan hatchet-job of a movie (and the books on which it is based), you have basically destroyed your own intellectual reputation, it seems to me.  Even FOX and National Review, two of the flagship conservative entities of our day, seem to think you've gone too far into the crazy right-wing world of Obama hatred.  The only folks that I've seen online who love your idea here is Glenn Beck, who is too wacko even for FOX, and some right-wing, conspiratorialist radio hosts.  So good luck with that.

Sadly, however, in the process of your own reputational self-destruction, you've possibly also managed to unfairly damage the reputation of a man who doesn't deserve it, a man far more important than you are to this country.  Movies like yours have great power in America, which is I'm sure why you made it.  (And I guess there must have been a LOT of money behind you as well, from who knows where.)  So your thesis will get a lot of play among people who don't know any better and who can be swayed by your emotionally powerful film.  Who knows, your trashy movie (because it trashes a good man) may prove decisive in this close election.  So congratulations, Mr. Movie Director.  I'm assuming that that's what you want from all of this.
Posted by Carl Lindquist at 1:05 PM