And As They Turn The Corner For Home, Obama Is Ahead By A Length....

As Obama's apparent electoral lead in the Presidential race continues to grow, it seems clear that he has done what he needed to do to win reelection.  Obviously, something could still go wrong (a debacle of some sort, akin to the economic crash of 2008, or a serious mistake in the debates) that could throw things Romney's way.  But as we work through the fall season, it looks less and less like that's going to happen. 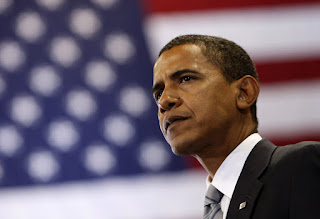 That's because Obama has done what he had to do, and Romney hasn't.  The Democratic convention was a tour de force, while the Republican convention was mediocre at best.  The Paul Ryan VP selection hasn't really worked out as well as some people thought, while Joe Biden hasn't botched things again since the summer.  Mitt Romney keeps looking incompetent when it comes to important matters (first and foremost, Libya) while Obama has been coming across as cool, collected, and Presidential.  The '47%' video discovered by Jimmy Carter's grandson has reinforced the already existing stereotype of Romney as an out-of-touch millionaire who doesn't care about the average person, while Obama has been hammering home his 'middle-class agenda'.  And, finally, Romney just comes across as a robotic, awkward, Nixonian type of personality, while Obama can sing like Al Green, smile like Mohammed Ali, and, well, I don't know if he can dance or not, but he's just cool!

[In regard to Romney's 'Nixonian' style, I just ran across this quote by Mickey Edwards, a long-time Republican, on how many conservative Republicans viewed Richard Nixon at the time:  "Conservatives had never thought of Nixon as one of them (he was, they believed, the ultimate pragmatist, unburdened by anything even faintly resembling belief or principle)...." (Crisis of Conservatism?, Ed. Joel D. Aberbach, 2011, p. 25)  Sounds familiar, doesn't it!]

As a result, as of today, Obama has a lead in the national polls, and a substantial lead in the all-important swing states like Ohio.  This race, fluid in the beginning, is now firming up, and that spells trouble for Mitt Romney and the Republicans.  The voter suppression efforts of the Republicans in many of the states will probably hurt the Democratic margin but probably won't be enough to carry them to victory.

It looks to me like Obama is really getting his political act together.  He is learning lessons that every President has to learn in order to succeed in that office, and I predict that if he is reelected, then, barring some disaster of the Kennedy kind (God forbid), he should be able to do some significant things.  First on the agenda will be getting to some kind of national fiscal solution along the lines of the 'Grand Bargain' or Simpson-Bowles.  It appears to me that the stars might be properly aligned for this to happen, including the end of the Bush tax cuts on January 1, 2013, and the severe 'sequestration' budget cuts slated to take effort very soon in the new year.  It will require some responsible and sane Republican leaders to repudiate the more radical Tea Party Republicans to achieve this, but it seems possible to me.

Second, you could well see some Supreme Court appointsment come along, which would allow Obama to avoid a further radicalization of the Court to the Right, and possibly, if one of the conservatives were to resign or die, move it back toward a more liberal court.

In terms of foreign policy, 'steady-as-she-goes' would be the order of the day.  It looks to me like Obama has done a good job of steering the 'ship of state' through some mine fields, and if he can continue that, then he may eventually be adjudged to have had a successful Presidency in that important realm of his responsibility: maintain our strong positions in the various global regions, avoid the outbreak of war, contain our potential adversaries while strengthening our alliances, reduce the risk of nuclear war, tamp down Islamic terrorism, and continue to be a model of freedom and justice for the rest of the world.

My guess at this point is that Hillary Clinton will run in 2016, (whoever wins in 2012) and if that is so, she will be a formidable candidate against any Democratic or Republican rival.  That's a long way out, of course, but she has one impressive resume!

On the other hand, what happens to the Republican Party only God knows, because it is such a mess.
Posted by Carl Lindquist at 9:55 AM