Not Ready for Prime Time

With the truly mediocre Republican convention and the superb Democratic convention behind us, it appears to me that this 2012 Presidential campaign is like a cake that's been in the oven long enough to start firming up.  As of the last few days, Obama is now significantly ahead in the big battleground states of Ohio, Florida, and Virginia, anyone of which would put him over the top in November. 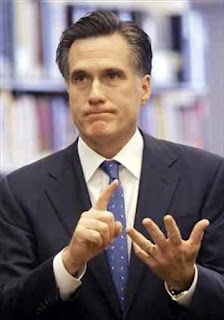 After a slight lift in the polls after picking Paul Ryan as the VP a month ago, it's been all downhill for Mitt Romney since then:

--He went to the Olympics in London and made clumsy statements that caused an uproar.

--The final night at an okay Republican Convention--where the best speech was given by overlooked VP candidate Marco Rubio--was overshadowed by a rambling, almost demented performance by Clint Eastwood.

--The Democratic Convention (especially the speeches by Michelle Obama and Bill Clinton) was a magnificently staged tour de force.

--And now Mitt Romney has stepped in a pile of dog poo, by rushing out a partisan attack on the Obama administration's handling of a situation in Libya, just before Ambassador Chris Stevens was killed by what is now looking to be a terrorist attack on the US consulate there.  Consequently, instead of appearing statesmanlike, Romney looks like a partisan hack or worse.

All of this has left potential allies of Romney, like 'Morning Joe' host and former Republican Congressman Joe Scarborough, sputtering in frustration, angry with Romney for being so inept and unPresidential.

As for me, I've wanted to give Mitt Romney the benefit of the doubt, by acknowledging that he has significant personal strengths: strong faith, strong family, significant business experience, intelligent and well-educated.  I've even complimented his governing experience in Massachusetts, seeing it as an indication of how he might govern as President, i.e. as a pragmatic moderate.

Yet it seems that, despite the economic problems facing Barack Obama, and despite all the hysterical and irrational rage and hatred that's been generated toward the President on the Far Right, Mitt Romney is probably going to lose this election.  Why?

In truth, I think the primary answer is that the 'real Mitt' has, once again, been revealed over the last few months.  For years now, we've been watching this man campaign for the Republican nomination, and he could never get any traction, instead just doing well enough to survive.  Every other candidate in the race had their moment in the sun, taking over first place in the polling, with Romney in second place.  And each one faded, with Romney hanging in there.  Finally, when there were no more candidates to challenge him, Romney--looking bruised and battered--staggered across the finish line and collapsed.

The problem is that few people really like him as a person or a candidate.  He comes across as awkward, strange, goofy, clumsy, and ever ready to utter that maladroit statement or show that creepy smile of his.  Even his gait reminds you of the nerd in highschool, who carried pens around in his shirt pocket and wears his pants too high on his waist.  He has few friends in the political world, even among Republicans.  Indeed, one of the strangest things we heard during the primaries was the description of the way other Republicans made fun of him and really did not like him at all.

Though this kind of personal description may seem unfair, I think over time it all adds up to an unacceptable candidate.  And then add in the fact that he seems to have no real principles except his ambition to be President, that he will switch positions on policy and say virtually anything to please this or that group of voters.  In other words, he's a damnable flip-flopper, a wishy-washy, unprincipled politician who seems to have no discernable center, except his desire to accomplish what his father was denied.

I don't know how many conservatives/Republicans I've heard say that they're not so much voting for Romney as they're voting against Obama.  Which of course is why the Right Wing has put such time and money and effort into demonizing Barack Obama into a Muslim Marxist African Radical UnAmerican.  Just so that you are so frightened by this 'dangerous' President that you would accept ANYONE else in his place.

But it appears that this disgusting and pathetic strategy of personal destruction is not going to work.  The American people are not that stupid.  They know who Obama is and what he has done, and they know that he is not a 'Radical Socialist Muslim'.  He may not have done everything right, he may have made mistakes, but all in all, he is likeable and he has done a decent job in what has to be the hardest job in the world.

Basically we have debates to go, and then the voting.  If Obama does well in the debates, which I fully expect him to do, given that all he has to do is talk about what he has done and learned over the last four years, then barring some unexpected event that turns the tide in the other direction, Barack Obama should win approval for another four years in the White House.

And Romney?  I have a feeling that he will come across in the debates just as he has for the last couple of years, and we already know what that is.  Not Ready for Prime Time.
Posted by Carl Lindquist at 9:23 AM