The Republican Party desperately wants another Ronald Reagan.  We hear this all the time from the various conservative politicians and media personalities.  Ronald Reagan represents the GOP's ideal of what it means to be President of the United States.  Likewise, the Democrats always seem to want their Presidential candidates to be cut from the same cloth as Franklin Delano Roosevelt (although recently Bill Clinton is starting to become the new model for Democrats, something that was unthinkable only a few years ago, given his 'that woman' problem). 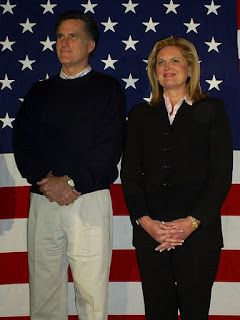 This of course is impossible, because history simply doesn't work that way.  Think back on all our Presidents, and you will find that no two are alike (except perhaps in mediocrity).  The great Presidents--George Washington, Thomas Jefferson, Andrew Jackson, Abraham Lincoln, Theodore Roosevelt, Woodrow Wilson, Franklin Roosevelt, Lyndon Johnson, and Ronald Reagan--were all outsized personalities and outstanding leaders--but differed greatly from one another in personal characteristics and the challenges they faced.

So the Republicans are looking for another great leader who will lead their party to electoral success and ideological unity.  But what they got this year is definitely not that.  Mitt Romney is no Ronald Reagan.  But who is he then?

Republican eminence Peggy Noonan commented recently that "Romney looked weak today. At one point, he had a certain slight grimace on his face when he was taking tough questions from the reporters, and I thought, 'He looks like Richard Nixon.'"  I had thought that myself before I heard it from Noonan, because of Romney's awkwardness in public, which was a strong Nixon trait.  (However, Nixon had a foreign policy strength which is totally absent in Romney, so this comparison doesn't go anywhere good.)

Perhaps Romney resembles one of the many businessmen who were elevated to the Presidency during the long Republican dominance of the White House after Lincoln and before FDR.  I'm not very familiar with Coolidge or Hoover or Harding, so I can't really say.

But perhaps Romney is simply 'sui generis', something unique and different, or better yet, something quite peculiar.  That would be my take on him.  We've not had his kind before, such that if he wins the election, it's going to be quite interesting to see what happens.  Below are some of his personal characteristics that stand out to me as both important and peculiar.

First of all, Mitt Romney comes across to me as a cultural outsider.  The primary form that this takes is the fact that he's a devout Mormon, which means that he has been raised in--and continues to be immersed in--a religiocultural tradition that is WAY outside the American mainstream.  (You could also analyze the way in which his affluent upbringing and current wealth make him an economic 'outsider' as well, but I'll stick to the Mormonism here.)

Now, I don't mean to say that he's unAmerican, because if there is any religious tradition that is uniquely American, it would probably be Mormonism.  This religious byproduct of the very creative mind of Joseph Smith, in early 19th century upstate New York, is overwhelmingly early American in its nature and characteristics.  The founders of 'The Church of Jesus Christ of Latter Day Saints'--Joseph Smith, Brigham Young, and the other early leaders--took the evangelical, revivalistic Protestantism of their time in which they were themselves raised, crossbred it with the magical, hermetic traditions (crystal gazing, treasure hunting) that were pervasive in the culture of that time, added a pinch of Smithian biblical innovation, a dash of 19th century authoritarian communalism, a huge dollop of 'free love' (in the form of Mormon polygamy), and the bowl of Utah Territory isolation and voilà, you have the Mormonism of the 19th Century.

As Mormonism moved into the 20th century, it gave up (mostly) its cultic polygamy and its Utah political authoritarianism, and began to morph into a more normal American religious denomination.  In so doing, it reached the point where, despite its very unusual traditions and beliefs, one of its devoted members could strive for the Presidency without too much discrimination against him.

Still....Mormons are different, no doubt about it, both in how they are seen AND in how they see themselves.  Only time will tell how much this becomes an issue, both in whether Romney is elected, and in how he conducts himself as President if elected.

The third peculiar thing about Romney that I would note as important is that he remains undefined as to his true political convictions.  He ran in the Republican primaries as a conservative, saying whatever needed to be said to gain enough support among the various conservative factions of the current Republican Party.  He was against abortion, immigration, taxes, etc.  He is for more military spending and a 'strong' America.  He is for shrinking the national government and increasing the role of business and private enterprise in American life.

Yet the fact is that as Massachusetts governor, less than 10 years ago, he governed as a distinct pragmatic moderate and guided into law the first universal health care program in the nation.  He was pro-choice, pro-environment, and pro-gun control.  Furthermore, his parents were, in the context of the times, moderate-to-liberal in their political views, including on the issue of civil rights.

So which is the real Mitt Romney?  Nobody seems to know.

The fourth thing I would say about Mitt Romney is that he has no military or foreign policy experience whatsoever.  (It was quite jarring to see him and Paul Ryan come running out of that warship at Norfolk when Romney announced Ryan as his choice for VP.)  Furthermore, he has, except for political boilerplate statements about America's role in the world, said almost nothing that would indicate that he thinks about foreign policy or national security issues, which of course are one of the primary responsibilities of the President.

Finally, various articles about Mitt Romney in a number of different journalistic sources have made it very clear that he doesn't let others think for him or make decisions for him.  In other words, when given a job to do, he accepts it, makes his own decisions, and doesn't let others tell him what to do.

Which leads me to say that if the Republican Party thinks it's just going to have a patsy in the White House to sign whatever bills it gets through Congress, then it had better think again.  Mitt Romney will do whatever he thinks is best, WHATEVER THAT IS.

So here's the bottom line for me: Mitt Romney is an enigma and a mystery, who would also be a political force to be reckoned with, if he wins the Presidency in less than two months.

Who knows, he might accomplish great things if he's elected President.  After all, he instituted Romneycare in Massachusetts and rescued the Utah Olympics.  Maybe he'll lead the effort to renew the economy and lead us into a new American Century of prosperity and peace.

On the other hand, with his inexperience in foreign policy and his weird views as a Mormon, maybe he would inadvertently lead us into a nuclear holocaust.

Or perhaps, with his strange personality and his lack of connection to the Republican Establishment, it could be that he would cause the Republican Party to explode into a dozen different pieces.  In other words, perhaps he's the Anti-Reagan.  (I think that would be a good thing, actually!)

Only time will tell.  In the meantime, I'm voting for Barack Obama, because with all his faults, I think I know what he'll do.
Posted by Carl Lindquist at 8:52 AM