It was interesting to hear that the Romney campaign has decided that the answer to their 'free fall' is 'more Mitt'.   That's it?   Really? 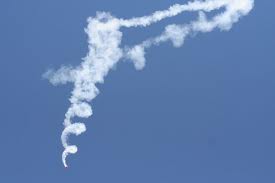 Don't they realize that Mitt Romney IS their problem? This guy is a disaster in progress. The high point of his campaign was the day he picked Paul Ryan. Since then, he's like a plane that's lost control and has gone into a death spiral.

Criticism from both right and left is morphing into ridicule.  There is a sense of doom that is beginning to settle over the Republicans, and it will be interesting to see if they can pull out of this.  The alternative could be 'every man for himself', a mad rush to the doors and the lifeboats, before the ship completely sinks (to mix metaphors).

And to think that Mitt Romney was the best of the Republican primary lot.  What a motley bunch that was:  Herman Cain, Michelle Bachman, Rick Santorum, Newt Gingrich, Rick Perry (have I forgotten any of that eminently forgettable crowd)?  The only one worth anything--Jon Huntsman--never had a shot, because he was too classy, too moderate, too brainy, and too bipartisan.

What a party!
Posted by Carl Lindquist at 12:09 PM