--It appears that it will be a close election, coming down to a few battleground states, primarily Pennsylvania, Arizona, North Carolina, and Michigan.

--The momentum the last week or two appears to be with Trump.  His rallies and ‘parades’ have been massive and enthusiastic, while the Biden/Harris ticket, not so much. 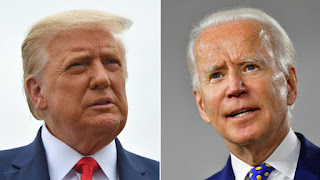 --Working in Trump’s favor are the following: a ‘shy Trump’ vote of significant proportion; movement among black and Hispanic voters toward Trump;  Republicans seem to be doing better in new registrations;  undecided voters sick of COVID lockdowns and urban rioting and disorder;  Democratic intentions to move away from fossil fuels; and the recent revelations about Hunter Biden (and the possible corruption of Joe Biden), though these have been censored rather effectively by Big Media and Big Tech.

--Working against Trump are the following:  continuing unhappiness with Trump’s ‘Queens’ personality, a sense that he is not Presidential enough;  unhappiness with his handling of the COVID crisis;  the economic downturn due to COVID;  a Big Media and Big Tech that is politically partisan and decidedly anti-Trump;  some people—especially ‘suburban women’—who desire a ‘return to normal’;  younger ‘millennials’ who have been indoctrinated throughout their education in the new ‘woke’ ideology; and a new emphasis on mail-in voting that is ripe for abuse and fraud.

And I’m sure there are more factors not mentioned above.  How all of that adds up in terms of votes is anyone’s guess.  I do think that a Trump victory would not be as shocking to Democrats and liberals this time as it was last.  There WOULD be major ‘resistance’ in that event in the big blue cities (especially DC) and it’s anyone’s guess where that goes.

If Biden ends up the clear winner, a whole different scenario unfolds.  I believe he is effectively a figurehead in the Democratic Party, without much energy, strength, mental acuity, or true popularity.  He only won the nomination because he was a 'least common denominator', inoffensive to the most people across the party and country.  The powers-behind-him would probably try to keep him out of public as much as possible, to avoid gaffes and exposing his obvious infirmities.  At the same time, there would be a more obvious struggle in the Democratic Party between the true Leftwing figures (like the Squad) and the more establishment oriented figures (like the Clintons and Obamas).  Both sides of this intraparty quarrel will be at the table and represented in the appointment process, yet we’ll probably get more insight into that struggle, since the big media would feel more free to report on it honestly with the political demise of Trump.

Also, I think it is very possible that the Democratic powers-that-be will use Biden’s liabilities (obvious mental frailty and Hunter Biden’s scandals) as a way to keep him in line doing what they want him to do (such as creating new Democratic states like DC and Puerto Rico, and 'packing SCOTUS')  And at some point, probably within the next year or two, I think they will use those liabilities to ease Biden out of office and replace him with Kamala Harris, a useful and dangerously amoral tool for their cause.

If the Democrats take over, it will be interesting to see how the conservatives and Republicans respond.  Obviously, there wouldn’t be immediate rioting on their part, as there almost surely will be by the radical Left if Trump wins again.   Yet when (not if) the Democrats move on major elements of their platform, such as gun-control measures, that is when all hell could potentially break loose in fly-over country.  I suppose that is my greatest fear, in terms of movement toward actual national division/civil war.  (In that regard, it will be interesting how the new SCOTUS configuration will change that movement toward gun control and/or confiscation.)

Carl’s Prediction:  given all of the above, I think that Trump will squeak out a victory, with Pennsylvania and possibly Michigan giving him the edge.  I’ve seen several people predict an electoral college win of 279-259.  I’m going with that.  And in terms of the Senate, it will be a 50/50 split, with VP Pence holding the deciding vote (he’ll have to be there a lot!)