Two weeks after the 2020 Election, There is No President-Elect. And That's Okay.

We're now two weeks after the 2020 election, so where do things stand? 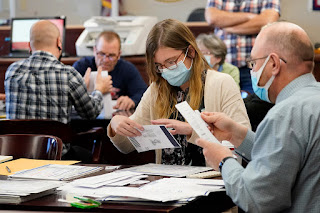 The Big Media--Big Tech--Democratic Party complex is, of course, all-in on considering Joe Biden to be the 'President-Elect'.  That is understandable, of course, but it's not technically correct.  Big Media, let alone the Democrats, are nowhere in the fundamental law of our country, the Constitution, considered to be the decider of that issue.  Rather, the Electoral College, meeting on December 14th by state in each of the 50 state capitols, is the actual authority in this matter.  And from what I understand, the results aren't actually completely finalized until they are received in the Congress sometime in early January.  Only then is it totally definitive as to who the new President-Elect is going to be.

In the meantime, President Trump and many of his voters are not conceding this election.  Rather, they are currently contesting the results in about six swing states with investigations and lawsuits.  There is of course recent precedent for this.  In 2000, the Presidential contest between George W. Bush and Al Gore was not decided for some 37 days after the election itself.  Gore did not concede the election (not that that is legally necessarily at all) until that period of time was over.

That being the case, what's the problem with taking 5 or 6 weeks to work through the post-election process before prematurely declaring anyone the President-elect?  None that I can see.  Therefore, as of now, I do not consider Joe Biden to be the President-Elect, and I don't see anything wrong or abnormal or disrespectful about that.

Many people on the ideological Left in this country would like to imagine that we are to an historical turning point where the formal electoral procedures laid out in the Constitution can be safely ignored.

At least half of the country disagrees with that.  Ferociously.  Adamantly.  Defiantly.

So let's all chill for a few weeks.  There's no rush here.  Let's do this right.

Posted by Carl Lindquist at 1:04 PM