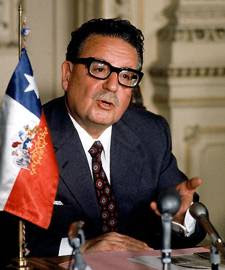 Before you disappear, before you can no longer hear
my words from beyond the beyond and inside the ground,
before your run ends in downfall and rout and retreat,
let this old heart beating with the Earth and the stars
and the need for not one child, not one, to die for lack of love,
let me tell you one last secret found in the abyss of despair.
It is true that he who is mighty is he who makes of an enemy
a friend, mighty and wise is he who offers the foe
a way out, a bed to sleep in, a meal to share.
But not without a fight. Not without a fight.

Listen to me, Barack, listen to this man who left too soon
and never saw his grandchild born and lost his way.

You will be destroyed. I have seen men like them before.
They will stop at nothing, they want it all and more.
Can’t you see, can’t you see what is being planned?
You are the victim of a silent coup, an invisible invasion
of every last corner, every last law, every last height.
Don’t you understand that they want it all, that they don’t care?
I have seen them, they will not be stopped by smiles.
You will be destroyed, take down with you all that is good,
what the wretched of the Earth built against the dark.
These are the same men, the same billionaires, who did me in.

They will blow it all up, derail the train, they do not care.
They deal in fear, they do not know right from wrong.
Oh do not let yourself be seduced by the siren of their song.

They are coming for you as they came for me.
I can hear their footsteps drawing near.
And you ever more alone.

Listen, listen: if you are to go down, go down fighting.

Barack, listen to your name. Lightning, glittering of weapons,
blessed, blessing, be your name, go down fighting.

Barack, listen: if you are doomed, go down fighting,
so others can come after and build,
so a legend is left, a spark to start the next fire, to inspire
and bring word of a new world waiting to be born,
fight so there may be peace, fight for what you believe in,
do not leave the dead without consolation and the living with no faith.
Trust your name. Go down if you must, but go down fighting.

So that when you arrive on these shores
and look back as I do, you will have no regrets.

Posted by Carl Lindquist at 9:47 PM