Rick Perry Isn't Out of It Yet, Since It's Romney He's Running Against

An apt and simple essay by a Texan novelist on the very simple Governor of Texas :


What Perry has brought to the Republican muddle thus far is his abundant, if unfocused, energy. He rushes from debate to debate, gives many interviews, gets his picture on the cover of TIME; yet all his politicking is curiously affectless. He makes sounds, but where’s the personality? Hillary Clinton has a personality; so does Sarah Palin. Either of those women could cut Governor Perry off at the knees, and will if given the chance. 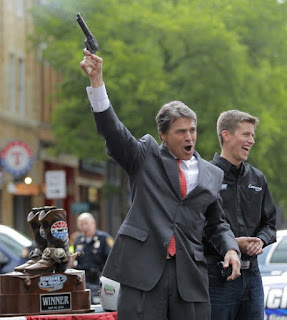 It’s not been said so I’ll say it: as a politician Rick Perry is fundamentally lazy, so far as actual governing is concerned, content to run things mainly by sound-bite. He makes lots of decisions but lingers on no issue very long; there’s little follow-through....

Lately Perry has been combing his hair like Ronald Reagan, and certainly he had something of Reagan’s deep untouchability, a factor commented on or admitted even by Nancy Reagan. What really touches Rick Perry I don’t know, but rumors of scandal don’t interest him at all. In 2005 The Austin American-Statesman did a long investigative piece about Perry’s libido-life. Austin, a fishbowl of a town, was agog with rumors of Perry’s gayness, or, failing that, at least some garden-variety infidelities. Anita Perry’s departure was several times predicted; but Anita is still there and the newspaper drew a complete blank. The Perrys, apparently, just laughed it all off. Gone forever, I guess, is the Austin of Billy Lee Brammer’s The Gay Place, itself a kind of hymn to fornications past.

Ronald Reagan, remote or not, was much more likable than Rick Perry; at least Reagan enjoyed the camaraderie of politics. What Perry actually likes is anybody’s guess. Maybe it’s just shooting coyotes with his laser-sighted .380 Ruger, for which he has a concealed-weapon license. The coyote he shot was said to be menacing his daughter’s puppy. Perry laid the coyote low, and that single act is the only thing most Texans know about their governor—it seems to me a dubious credential on which to hang a presidential run....

Governor Perry’s opponents have not had much time in which to study his long record; neither has the press. When they get around to it I hope they’ll pay close attention to his appointments and his vetoes—273 and counting—of everything from forcing insurers to pay doctors more promptly to prohibiting the execution of mentally retarded criminals. Let them discover why our well-funded school system is now 47th in the nation.

Posted by Carl Lindquist at 4:33 PM