Political Scientist Andrew Bacevich, in a review of a biography of sociologist Christopher Lasch, writes about the populism beginning to manifest itself across America in such expressions as the Tea Party and the 'Occupy Wall Street' movements: 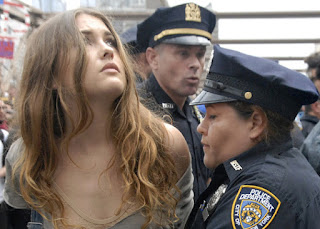 The truth about American politics is this: disguised by the theatrics of squabbling Democrats and Republicans, Washington governs according to limits prescribed by a fixed and narrow consensus. The two main parties collaborate in preserving that consensus. Doing so requires declaring out-of-bounds anything even remotely resembling a fundamental critique of how power gets exercised or wealth distributed. Populism poses a challenge to that consensus—hence, the hostility with which it is treated by those purporting to express respectable opinion.

When it comes to political choice, devotees of the existing two-party system contend that Americans already have all they need or can handle. Folks inhabiting the middle of the country (while occupying the lower reaches of the socioeconomic ladder) don’t necessarily see it that way. So radicalism persists. What Brooks and other enforcers of ideological discipline deride as populism is radicalism in the American grain, expressing itself in an authentically American, if less than genteel, voice.

Populism frightens the fat cats and the defenders of the status quo, and with good reason. Yet for observers who find the status quo intolerable, the populist critique contains elements worthy of empathy and respect.


One such observer was the late Christopher Lasch (1932–94), historian, cultural critic, contrarian, and wayfarer. A son of the Middle Border, born and raised in Nebraska before his parents moved to Chicago, Lasch, writes Eric Miller, “was a surveyor, taking the measure of the wilderness.” The wilderness was modern America. What Lasch discovered there were pathologies advertised as “progress,” promoted by elites for their own benefit with little regard for the common good.

Miller, who teaches history at Geneva College, has written a biography of Lasch, with the evocative title Hope in a Scattering Time. A fine, thoughtful, and even moving book, its appearance could hardly be more opportune.

In our own day, the politics of progress have passed the point of exhaustion. Were there any lingering doubts on that score, the vast disparity between the expectations raised by President Obama’s election and the dispiriting reality of the Obama Era has dispelled them once and for all. Only knaves and fools will look to Washington to devise solutions to the problems afflicting American society today. Indeed, further deference to established centers of power, on issues domestic or foreign, will surely perpetuate and even exacerbate those problems.

So the times call for a searching reassessment of the American condition. Neither left nor right—especially in the adulterated form found in the actually existing Democratic and Republican parties—possesses the capacity to render such an assessment. To reconsider first principles requires an altogether different vantage point, firmly grounded in the American experience yet offering something other than the recitation of clichés and posturing in front of cameras.

Lasch occupied and speaks from such a vantage point. Through a series of books, chief among them Haven in a Heartless World (1977), The Culture of Narcissism (1979), and The True and Only Heaven (1991), he sought, in Miller’s words, “to convince and persuade Americans of the true nature of their circumstance.” Like some prophet from the Hebrew Bible transported to an America at the very height of its power, Lasch “moved in the spirit of reckoning, freely casting judgment on all.” His countrymen could choose to listen or to turn a deaf ear: that was not his to decide. His calling was simply to speak the truth and offer it for their consideration.

I've collected some of Lasch's books over the years, and it looks like I need to pull them off the shelf again.
Posted by Carl Lindquist at 11:52 AM