Mormonism and the Separation of Church and State

Mormonism.  What is it exactly:  a Christian denomination?  A Christian cult?  A non-Christian religion?  Where did it come from?  And what does it believe and teach?  These questions have always been of interest to scholars and teachers of religion.  In fact, I taught a course at my church several years ago on 'Peculiar American Religions' which included several lessons on Mormonism. 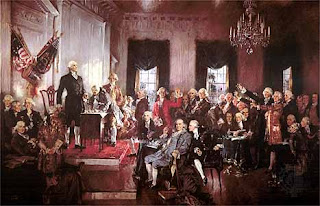 Yet now Mormonism has become of direct political relevance to the Republican Party, since its front-runner is a Mormon (Mitt Romney) and his nearest competitor to the nomination, Rick Perry, is a Fundamentalist Christian, whose followers have, to put it mildly, some problems with Mormonism.

So, since I have some professional background as a teacher of religion and have studied Mormonism for purposes of discerning its essence and place in the history of Christianity, let me share some of what I learned.

But before I do that, let me say two things about our national political system.  The first is that our national constitutional tradition holds that there should be no 'religious test' for political office, at least at the national level (US Constitution, Article VI, Paragraph 3).  This, along with the 'free exercise' and 'no establishment of religion' clauses of the First Amendment, establish what has been called the American 'separation of church and state' tradition.  Fundamentalists have in the last 20-30 years disputed this, but I think it is firmly entrenched in the founding documents of our country and therefore indisputable as the 'American Way'.

Secondly, we Americans are a very diverse people in every way, including our religious traditions, and this has only increased over the centuries.  Therefore, if we start judging certain faith traditions as unacceptable in the political arena, our growing national tradition of tolerance and mutual acceptance will begin to dissipate, and that will not be good.

Therefore, while everyone is free to vote for whom they want and for whatever reason they want, it would be good if we would all be more open to candidates of all religious faiths, judging them solely on their personal character and their political views.  Personally, I could vote for a Protestant (evangelical or mainline), Catholic, Jew, Muslim, Hindu or Buddhist, etc--or even agnostic/atheist--if they held what I considered the appropriate political views and had the appropriate personal characters traits of integrity, honesty, courage, compassion, etc.

I'll start my analysis of Mormonism ASAP.
Posted by Carl Lindquist at 10:13 AM