This Is Not A Vulgar Joke 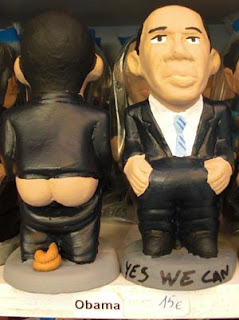 Found in the New Republic:

Your eyes do not deceive: Yes, that’s a figurine of the 44th president of the United States doing what is normally done in private. Witness the caganer, or "shitter" in Catalan.

A raunchy send-up? Not to Catalans. The original caganer, which goes back at least as far as the 16th century, memorialized the humble Catalan peasant giving back to the soil what it was good enough to give him. Exactly when or why is not clear, but this celebration of fertility eventually became linked to the celebration of the birth of Jesus. A Catalan Christmas, therefore, involves creating Nativity scenes at home, but along with the usual sheperds and Magi, there is always a caganer hidden somewhere outside the manger.

"The Obama caganer represents the Catalan hope that his efforts are fruitful, much as the original peasant version expressed the same hopes for the soil," says Anna Maria Pla, whose family--the Alós-Pla--has been making caganers since 1992. A record-high 1,300 of Obama’s caganers have sold in one month, and Pla hopes to sell another 700 before the holiday is over, twice the total for the President Bush version, even though that one’s been on the market for several years.

Posted by Carl Lindquist at 1:42 PM

Email ThisBlogThis!Share to TwitterShare to FacebookShare to Pinterest
Labels: obama