Things Here and There on Barack Obama

So, what's happening with Barack Obama these days? 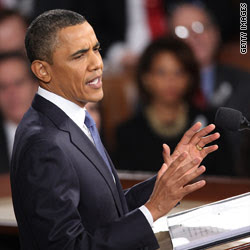 To be honest, it's hard to know without inside sources, which of course I don't have.  But with all the focus on the Republicans these days, the Obama administration flies like a stealth bomber under the radar.  Stuff must be going on, it's just hard to know what exactly.

Obama did do a recess appointment of Richard Courdray to the new Consumer Protection Agency, in defiance of the Republicans in Congress, who were refusing to allow him to appoint someone.  This one looks like it will be fought out in the courts (over the issue of whether Obama's recess appointment was legal, since Congress technically wasn't in recess).  I think it was a good move on his part.  As a caller to the Diane Rehm put it, the American people can see the farce of Congress trying to avoid going into recess.

Obama is now losing his second Chief of Staff, Bill Daley.  This doesn't look so good, frankly.  Why does Obama have to have these former or future mayors of Chicago as his chiefs of staff?  It looks creepy, frankly.  Please, Mr. President, get somebody from Washington who knows what they're doing and who will be able to do the job.  You look incompetent when you can't do that.

A rumor I saw floated the other day looked interesting.  Switch Joe Biden and Hillary Clinton, making Hillary the new VP nominee in the reelection campaign and Biden the Secretary of State.  I think this move could help reinsure Obama's reelection, putting new fire into the campaign and giving people something to work for.  The question is, I think: could Obama trust Biden to handle the very sensitive position of Secretary of State?

Obama's unwillingness to schmooze with members of Congress has certainly hurt him in his ability to form or move legislation, or so it would appear.  He comes across in many accounts as almost a Nixonian loner, isolated from the political currents in Washington and therefore more vulnerable when things aren't being accomplished.  The new title of a book on personal introversion--Quiet: The Power of Introverts in a World That Can't Stop Talking--sounds like it was written for Obama.  As an introvert myself, I can appreciate Obama's dilemma.  At times I wonder if an introvert like Obama can truly succeed in a office like the American Presidency that would seem to be made for an extravert (like Bill Clinton).  Other times I think that such a strategic thinker as Obama may be exactly what we need in this strategic turning point in our American history.  I guess only time will tell.

I agree with our departure from Iraq, the beginnings of our withdrawal from Afghanistan, and the shifting of foreign policy priorities from the Middle East to Asia.  If this campaign is about foreign policy, then Obama will win, because he has shown himself to be a strong President in that role.

Even in domestic economics, things are looking up for Obama.  While Europe sinks, America rises.  China's economy begins to look dicey, while our manufacturing begins to recover.  Who would have thought that a year or two ago?  Not me.  Perhaps the worst is behind us.  I sure hope so.

If the national election were being held today, given the choices I see now, I would vote for Obama again.
Posted by Carl Lindquist at 7:29 AM