Romney As a Family Man

I ran across a reference to this article on Mitt Romney in Vanity Fair.  What I've read so far is interesting and insightful.  Here's an excerpt on his family: 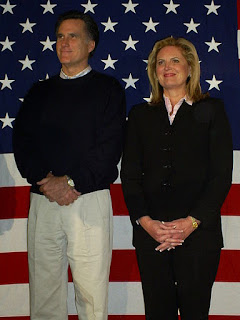 The Romneys’ Mormon faith, as Mitt and Ann began their life together, formed a deep foundation. It lay under nearly everything—their acts of charity, their marriage, their parenting, their social lives, even their weekly schedules. Their family-centric lifestyle was a choice; Mitt and Ann plainly cherished time at home with their children more than anything. But it was also a duty. Belonging to the Mormon Church meant accepting a code of conduct that placed supreme value on strong families—strong heterosexual families, in which men and women often filled defined and traditional roles. The Romneys have long cited a well-known Mormon credo popularized by the late church leader David O. McKay: “No other success can compensate for failure in the home.” They had arrived in the Boston area with one son, Taggart, and soon had a second, Matthew. Over the next decade, the Romneys would have three more boys: Joshua was born in 1975, Benjamin in 1978, and then Craig in 1981.

To Mitt, the special one in the house was Ann, with her wide smile, piercing eyes, and steadying domestic presence. And woe was the boy who forgot it. Tagg said there was one rule that was simply not breakable: “We were not allowed to say anything negative about my mother, talk back to her, do anything that would not be respectful of her.” On Mother’s Day, their home would be fragrant with lilacs, Ann’s favorite flowers. Tagg didn’t get it back then, but he came to understand. From the beginning, Mitt had put Ann on a pedestal and kept her there. “When they were dating,” Tagg said, “he felt like she was way better than him and he was really lucky to have this catch. He really genuinely still feels that way.” What makes his parents’ relationship work, he said, is their distinct characters: Mitt is driven first by reason, while Ann operates more on emotion. “She helps him see there’s stuff beyond the logic; he helps her see that there’s more than just instinct and feeling,” Tagg said. Mitt and Ann’s relationship would grow and change as their family entered the public eye. But she has remained his chief counselor and confidante, the one person who can lead Mitt to a final decision. Though she did not necessarily offer detailed input on every business deal, friends said, she weighed in on just about everything else. “Mitt’s not going to do something that they don’t feel good about together,” said Mitt’s sister Jane. Tagg said they called their mom “the great Mitt stabilizer.” Ann would later be mocked for her claim that she and Mitt had never had an argument during their marriage, which sounded preposterous to the ears of many married mortals. Tagg said it’s not that his parents never disagree. “I know there are things that she says that he doesn’t agree with sometimes, and I see him kind of bite his tongue. But I know that they go and discuss it in private. He doesn’t ever contradict my mother in public.” Friends of the Romneys’ back up that account, saying they cannot recall Mitt ever raising his voice toward Ann. Nowhere was Ann’s special status more evident than on long family car trips. Mitt imposed strict rules: they would stop only for gas, and that was the only chance to get food or use the restroom. With one exception, Tagg explained. “As soon as my mom says, ‘I think I need to go to the bathroom,’ he pulls over instantly and doesn’t complain. ‘Anything for you, Ann.’” On one infamous road trip, though, it wasn’t Ann who forced Mitt off the highway. The destination of this journey, in the summer of 1983, was his parents’ cottage, on the Canadian shores of Lake Huron. The white Chevy station wagon with the wood paneling was overstuffed with suitcases, supplies, and sons when Mitt climbed behind the wheel to begin the 12-hour family trek from Boston to Ontario. As with most ventures in his life, he had left little to chance, mapping out the route and planning each stop. Before beginning the drive, Mitt put Seamus, the family’s hulking Irish setter, in a dog carrier and attached it to the station wagon’s roof rack. He had improvised a windshield for the carrier to make the ride more comfortable for the dog.

Then Mitt put his sons on notice: there would be pre-determined stops for gas, and that was it. Tagg was commandeering the way-back of the wagon, keeping his eyes fixed out the rear window, when he glimpsed the first sign of trouble. “Dad!” he yelled. “Gross!” A brown liquid was dripping down the rear window, payback from an Irish setter who’d been riding on the roof in the wind for hours. As the rest of the boys joined in the howls of disgust, Mitt coolly pulled off the highway and into a service station. There he borrowed a hose, washed down Seamus and the car, then hopped back onto the road with the dog still on the roof. It was a preview of a trait he would grow famous for in business: emotion-free crisis management. But the story would trail him years later on the national political stage, where the name Seamus would become shorthand for Romney’s coldly clinical approach to problem solving.

The darker side of this close and intimate family life is detailed later in the article, in what appears to be a lack of interest in those outside his family and faith.


If Romney is exceedingly comfortable around family and close friends, he’s much less so around those he doesn’t know well, drawing a boundary that’s difficult to traverse. It’s a strict social order—us and them—that has put co-workers, political aides, casual acquaintances, and others in his professional circles, even people who have worked with or known him for years, outside the bubble. As a result, he has numerous admirers but, by several accounts, not a long list of close pals. “He’s very engaging and charming in a small group of friends he’s comfortable with,” said one former aide. “When he’s with people he doesn’t know, he gets more formal. And if it’s a political thing where he doesn’t know anybody, he has a mask.” For those outside the inner circle, Romney comes across as all business. Colleagues at work or political staffers are there to do a job, not to bond. “Mitt is always the star,” said one Massachusetts Republican. “And everybody else is a bit player.” He has little patience for idle chatter or small talk, little interest in mingling at cocktail parties, at social functions, or even in the crowded hallway. He is not fed by, and does not crave, casual social interaction, often displaying little desire to know who people are and what makes them tick. “He wasn’t overly interested in people’s personal details or their kids or spouses or team building or their career path,” said another former aide. “It was all very friendly but not very deep.” Or, as one fellow Republican put it, “He has that invisible wall between ‘me’ and ‘you.’” Referring to the time later when Romney was governor of Massachusetts, a Democratic lawmaker recalls, “You remember Richard Nixon and the imperial presidency? Well, this was the imperial governor.” There were the ropes that often curtailed access to Romney and his chambers. The elevator settings restricted access to his office. The tape on the floor told people exactly where to stand during events. This was the controlled environment that Romney created. His orbit was his own. “We always would talk about how, among the legislators, he had no idea what our names were—none,” the lawmaker said, “because he was so far removed from the day-to-day operations of state government.”

This sense of detachment is a function partly of his faith, which has its own tight social community that most outsiders don’t see. Indeed, the stories of Romney’s humanity and warmth come mostly from people who know him as a fellow Mormon. His abstention from drinking also makes parties and other alcohol-fueled functions distinctly less appealing. He is the antithesis of the gregarious pol with a highball in one hand and a cigar in his mouth. Romney’s discomfort around strangers would later become more than just a curiosity; it would be an impediment on the campaign trail. Lacking an easy rapport with voters, he would come across as aloof, even off-putting. “A lot of it is he is patrician. He just is. He has lived a charmed life,” said one former aide. “It is a big challenge that he has, connecting to folks who haven’t swum in the same rarefied waters that he has.” His growing wealth, the deeper he got into his career, only widened the disconnect.

I hate to say it, but this sounds curiously--except for the wealthy, patrician background--like Barack Obama, who is clearly uncomfortable with those outside his small circle of family and close friends.

Reminder: I have addressed the issue of Mitt Romney's Mormon faith in several places on this blog: With a historical survey here and here.  With a look at the 'top ten' peculiarities of the Mormon faith here.  And with a listing of the Mormon strengths as a 21st century American faith here.  My full listing of posts on Mormonism is here.
Posted by Carl Lindquist at 11:24 AM