Holbrooke and Obama on the War in Afghanistan

I had always thought that Richard Holbrooke was a 'hawk' in foreign policy, such that he supported, for example, Obama's Afghanistan 'surge'.  Wrong. 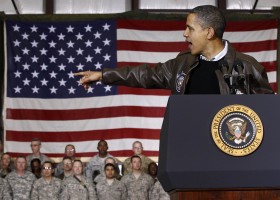 What I've learned in several articles published since Holbrooke's recent death is how much Holbrooke disagreed with Obama's military buildup in Afghanistan. Here's the first:

According to White House insiders, Holbrooke was an outspoken critic of Obama’s Afghan strategy, as it was being developed in advance of last year’s West Point speech. The much-discussed policy of a troop surge followed by a hasty withdrawal seemed ill-considered to the veteran diplomat, who cut his foreign policy teeth on the catastrophe of Vietnam.
“It can’t work,” he is reported to have said of the White House plan. Holbrooke was opposed to an escalation of the war without a clear exit strategy, something that he said loudly and repeatedly.
According to “Obama’s Wars,” Bob Woodward’s detailed account of the debates surrounding Obama’s Afghanistan policy, this earned him the impatience and even the distrust of the White House incumbent.

“Holbrooke believed that [the policy group] had not acknowledged a central truth: The war — or the American role in the war — would not end in military victory,” wrote Woodward. Holbrooke, he added, believed in reconciliation — a genuine outreach to the other side.

And then here's another, this one by terrrorism expert, Peter Bergen:


This [the military getting everything it wanted] was quite surprising, given the misgivings that so many of Obama’s key advisers had about ramping up American forces and efforts in Afghanistan. Lieutenant General Douglas Lute, the point person at the National Security Council for Afghanistan under both Bush and Obama, is quoted as saying that “I can’t tell you that the prospect here for success is very high.” Biden consistently took the view that “the war was politically unsustainable,” while his national security advisor Antony Blinken opined that “I don’t know if they can ever pull this off.” Obama's top counterterrorism advisor, John Brennan, thought that countries such as Yemen and Somalia were potentially more of a threat to the United States: “Afghanistan was a small piece of real estate … his worry was the rest of the world”. Rahm Emmanuel termed the war “political flypaper.” Of the president’s national security team, on the civilian side only Robert Gates and Hillary Clinton seemed to embrace wholeheartedly a large increase of American forces in Afghanistan. It is hard to recall another American war in which so many of the president’s top advisers were so ambivalent about approving a substantial escalation of forces.

More serious than what the key players told Woodward or one of his sources about their misgivings about the war—and, in fairness, who wouldn’t have misgivings about the outcome of something as complex as the war in Afghanistan?—were the official dissents about the evolving Afghan strategy filed by Karl Eikenberry, the U.S. ambassador to Afghanistan. Those dissents carried special weight as Eikenberry had served two tours in Afghanistan as a senior military officer, including as commanding general in 2006: he could hardly be considered a critic of the Pentagon, and he had also spent three years living in Afghanistan. In the first of two stinging cables that he filed to Clinton in November 2009, Eikenberry described Karzai as “not an adequate strategic partner” and raised serious questions about the abilities of the Afghan army and police to grow in size and efficacy. In his next cable, Eikenberry poured considerable cold water on McChrystal’s counterinsurgency plan, which he pointed out was not matched by a similar effort on the civilian side, and would cost a great deal, while it had scant chance of success if the Taliban continued to have a safe haven in Pakistan. Instead of sending a sizable new contingent of American soldiers, Eikenberry made the anodyne recommendation to appoint a “panel of civilian and military experts to examine the Afghanistan-Pakistan strategy.”

Interesting. So, how's it going, Mr. President?  Funny, I thought you said we'd be seriously withdrawing in 2011?  Now it's 2014.  I didn't believe it when you said 2011, anyway, so I'm not surprised.  But one thing is true: this will give you more chances to get on your 'commander's jacket' and fly over there in Air Force One, which you like so much.  Especially now that you and your base are 'at odds' over things, and you might just prefer to be out of Washington.

I guess every 'great' President's got to have their war.  Herbert Hoover (and Presidents like him) never got a monument, because he didn't have a nice war to run.  And, God forbid, Jimmy Carter failed miserably because he didn't take on the Iranians.  But Washington (Revolutionary War), Lincoln (Civil War), Roosevelt (WWII), now they're the 'great' ones, because they presided over wars.  That's what gets a nice monument in Washington when you're dead.
Posted by Carl Lindquist at 7:03 PM