The Weeper of the House

Gail Collins on 'the weeper of the House', cryin' John Boehner: 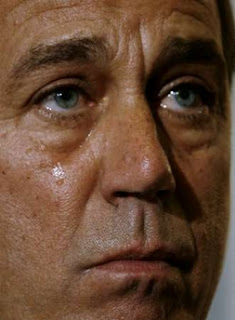 O.K. About Boehner. Many of us first noticed his tendency toward tears when he appeared on election night to celebrate his party’s taking control of the House. He had hardly gotten in front of the microphone before things got watery.
“I spent my whole life chasing (sob) the American dream,” he told the cameras. “Put myself through school, working every rotten job there was ...”
The American Dream has had such a bad year. During the campaign, it was tossed around by billionaire candidates who insisted on telling groups of underprivileged children that they, too, could someday own a mega-yacht or run a slimy but extremely profitable health care corporation.
Now, John Boehner is blaming the Dream for making him howl like an abandoned puppy. It’s what my friend Rebecca Traister calls “Boehner doing Masterpiece Theater on the hard life of John Boehner.”

I used to cry once in a while in the pulpit, so I'm not against men crying.  But isn't his crying a bit self-centered? It's really all about him, his aspirations, his career, his 'tough' childhood. That's my gripe with it.
Posted by Carl Lindquist at 11:27 AM