Ross Douthet writes in the Times about Senator Coburn: 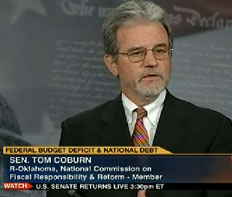 There is a conceit, especially popular among the press corps, that the salvation of America depends exclusively on self-described moderates and centrists. If there’s a path out of gridlock and insolvency, this theory goes, it can’t be charted by consistent conservatives or liberals. Instead, the nation needs the leadership of ideologically flexible, politically ambidextrous mavericks: Democrats like Evan Bayh, perhaps, and Republicans like Susan Collins, with President Michael Bloomberg waiting to sign whatever compromises they devise.
This vision doesn’t leave much room for a figure like Tom Coburn, Oklahoma’s junior Republican senator. Coburn came to Washington as a congressman in 1994, and distinguished himself by remaining incorruptibly right-wing while many Republican revolutionaries accustomed themselves to the perks of governing. Since his 2004 election to the Senate, he’s remained a conservative’s conservative, equally resolute in his opposition to earmarks, Obamacare and abortion.

But in the last two years, Coburn has also proved himself braver than many of his colleagues, more creative on public policy, and more intellectually honest about the consequences of popular legislation. His example suggests that America may be saved from fiscal ruin, not by politicians who trim their sails at every opportunity, but by lawmakers with stiff backbones and unwavering convictions.

In the health care debate, for instance, it was Coburn who co-sponsored (with the ubiquitous Paul Ryan in the House) the only significant conservative alternative to the Democratic bill. Their Patients’ Choice Act, which would have replaced the tax deduction for employer-provided health care with a universal credit, was arguably a more “extreme” proposal than the milquetoast reforms Republicans rallied around instead. But it was also a more serious proposal, with a real chance of reducing costs and expanding insurance, instead of just shoring up the status quo.

Then came the financial reform debate, in which Republicans accused Democrats of perpetuating “too big to fail,” but offered counterproposals that often looked like business as usual for the financial industry. Coburn, again, was less conventional: He was one of only three Republican senators to vote for an amendment proposed by two Democrats, Ohio’s Sherrod Brown and Delaware’s Ted Kaufman, that would have taken the “extreme” step of capping the size of America’s largest banks.

Several things that Ross writes here strikes a chord with me, but not primarily about Coburn (although it's good to know that too). Obama touts his health insurance reform as a 'signiture piece of legislation', but most of the criticisms I read about it say that it does little to lower cost, which is our biggest problem down the road.

Likewise with the banks, Obama's monstrous bailout of the banks left them basically uncontrolled and still 'too big to fail', in fact bigger than ever, making record profits and bonuses, but with the same 'moral hazard' about financial risk taking.

And this latest taxcut deal has the same smell about it, a short-term solution that doesn't address the longer term problem, but helps gets Obama reelected (which is Krauthammer's--and not only Krauthammer's--criticism).
I suppose you can defend any of these policies at the time as necessary and pragmatic, and indeed that's exactly what has happened.  But the health care conundrum has not been resolved (not even close, despite the bragging), the banks are a complete disgrace, and this tax deal sounds just like what Clinton did in the 90's with NAFTA and a bunch of other things (it's no surprise Obama turned him loose in the White House Press Room).

In my heart of hearts, give me the principled and honest Browns, Kaufmans, Feingolds, and (according to Douthet) Coburns any day, over the status-quo oriented, deal-making Obamas. I'm sorry, but that's where I've come to in two years.
Posted by Carl Lindquist at 10:54 PM