The Bitterest Man in Washington

We may have reached the high water mark of reform of this administration with the repeal of DADT yesterday in the Senate.  In the end, a center-left (and even a few conservatives like Lieberman) coalition of 57 Democrats and 8 Republicans voted to allow gays and lesbians to serve openly in the military.  To his credit, President Obama was working for this with a quite drawn-out-but-probably-necessary process, going through a study in the military to gain the support of most of the top leaders there, which, in turn, led to enough cover for the moderates of both parties to vote yes.  Ironically, it was probably a true conservative Independent stalwart who made this possible, Sen. Joe Lieberman, who came to it with quite a passion. 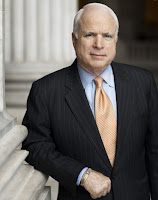 The Senator who probably made quite a fool of himself during the whole process was John McCain.  One wouldn't have thought this, given his more moderate views in the past, but it's true:

Saturday's debate on the repeal of the "don't-ask-don't-tell" policy was only half an hour old when the Arizona Republican burst onto the floor from the cloakroom, hiked up his pants and stalked over to his friend Joe Lieberman (I-Conn.) and Senate Majority Whip Dick Durbin (D-Ill.). Ignoring Sen. Jim Inhofe (R-Okla.), who had the floor, McCain hectored the men noisily for a few moments, waving his arms for emphasis.

When McCain finally stormed off, Durbin shook his head in exasperation and Lieberman smiled. A minute later, McCain returned - he had apparently remembered another element of his grievance - and resumed his harangue.

It turns out McCain's fury was stirred by a trifle - he had wanted more time for the debate, which the Democrats eventually gave him - but that was typical. It doesn't take much to set off McCain these days.

McCainologists in the Capitol speculate that on this and other issues he's driven less by policy consideration than by personal animosity. A decade ago, his antipathy toward President George W. Bush led him to seek common cause with Democrats to thwart a Republican president. Now his antipathy toward President Obama has made him a leading Republican hardliner.
On Saturday, McCain's rage was all the more striking because the general tone of the debate was tame. Republicans were mostly defensive, objecting not to the service of homosexuals in the military but to procedures and other technical matters. Sen. Saxby Chambliss (R-Ga.) said of the repeal: "Should it be done at some point in time? Maybe so, but in the middle of a military conflict is not the time to do it."

Such tactical arguments made it appear that the opponents were standing against the inevitable tide of history. Lieberman said the repeal would "advance the values that the founders of our country articulated in our original American documents."

In the end, McCain lost eight Republicans as the ban was easily overturned. This wasn't entirely surprising, because Defense Secretary Robert Gates (a Bush administration holdover) and Joint Chiefs Chairman Mike Mullen both argued passionately for repeal, and a Pentagon study forecast that a repeal would not bring significant harm.

Is it possible that having lost so many times to both Republicans and Democrats in his drive for the Presidency has simply pushed McCain over the edge? If so, I think it actually happened before this, when he foisted Sarah Palin upon the country two years ago, in what has got to be the worst political move EVER. He'd have probably won if he had picked someone more acceptable to the broad range of Americans.

"This is a very sad day," he said on the floor of the Senate.  Words he will probably live to regret.  Poor John McCain...the bitterest man in Washington.
Posted by Carl Lindquist at 10:24 AM