The Strengths of Mormonism

As a result of my study of Mormonism (out of curiosity due to the prominence in the Republican field of the Mormons Mitt Romney and John Huntsman), I have written quite a few posts on that religion, trying to explain where it came from and how it differs from traditional Christianity.  I've tried to be gentle and graceful in doing this, but I don't think I've always succeeded. 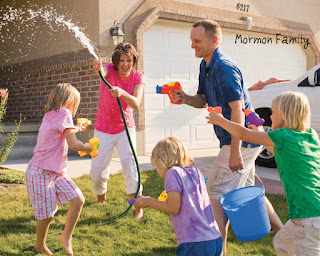 However, let me comment now on the strengths of Mormonism, because they are considerable.  Here I'm not so much referring to theological belief or truth but rather to sociological aspects, that help to account for not only its ability to be sustain itself over time against quite devastating attacks, but to also continue to grow, both in the United States and around the world.

I'm not sure how to rank these strengths but certainly one of the most important is the Mormon emphasis on marriage and the family, so I'll start with that.  We live, of course, in a time of marital dissolution and family discord, so the Mormon emphasis on these important social units is especially significant.  Marriage is thought to be eternal, as is the extended family.  Weddings are expected to take place in the Mormon Temples, so that they are given an honored place to begin with.

Furthermore, there is tremendous moral emphasis on both premartial chastity and marital fidelity.  This is taught consistently from cradle to grave, both in religious education and in church.  Furthermore, children are seen as a normal and expected part of life, something to be cherished, not to be shunned.  Put these things together, and you have a family stability that sociology tells us is often crucial to economic success and personal happiness in life.

A second strength is one I referred to in the previous paragraph, namely, the emphasis on religious education and formation.  Mormon religious and moral training is life-long.  It begins early in childhood, continues through high school and college as a part of school, and then continues in adulthood at church and in the home.  The beliefs and values are inculcated over and over again, making for a very strong belief- and value-system.

A third strength is the hierarchial, top-down nature of Mormon authority and decision-making.  It is as far from democratic as you can imagine.  All key decisions in the Mormon church are made by the key 15 men at the top, in the First Presidency and the Quorum of the Apostles, and they come down the chain of authority all the way to the individual members at the bottom.  Even in their local congregations called wards, all decisions on every issue are made by the 'bishop' who is the ward leader, a layman appointed to that position by the hierarchy above him.

Because of this patriarchal, hierarchical structure, there are no power disputes, no congregation vote-taking, no uncertainty as to what to do, no taking sides with or against the pastor.  Everything is streamlined and clear.  All Mormons submit obediently to the powers-that-be.  This may seem unattractive to non-Mormons (and who knows, perhaps some Mormons as well!), but it works very well to get things done in the Mormon way.

A fourth strength of Mormonism is the lay--and especially male--participation in key leadership and ritual roles.  In fact, there are no professional clergy as such in the Mormon church.  No pastor relies on a salary here.  Every leadership position is filled by a trained and able layman, and he is assisted by many more layman beneath him.  In fact, every Mormon boy, beginning around age 12, is initiated into the 'priesthood', either 'Aaronic' or 'Melchizadek', and this qualifies him to fulfill ritual and service roles inside and outside the congregation.

As a result, every man feels important in the Mormon Church.  They have a job to do, duties to perform, that everyone considers to be important to their faith.  Nobody sits in the back pew in the balcony, feeling like a fifth wheel.  How women feel in such a patriarchial organization is another question.  But female participation in church is rarely the problem for most denominations anyway.  It's always the men who tend to be sidelined and to drop out.  But not in Mormonism.  I wonder if Joseph Smith and Brigham Young borrowed this from the Masons, to which they both belonged, and which heavily influenced the Temple ritual?

The zenith of this comes about when young men reach the age of 18, and they are sent on their 2 year long mission.  There is simply no equivalent to this in any other Christian denomination that I know of.  It doesn't take much imagination to understand how important these mission trips would be for solidifying young Mormon men into their faith and their Mormon society.

A fifth strength of Mormonism is the presence of sharp membership distinctions and boundaries.  There is nothing wishy-washy about the Mormon faith.  It is black and white, with strong beliefs and moral values, that Mormons are expected to abide by.  And if you stray too far, you will be prevented from going to the Temple, and in extremis, possibly face excommunication from the church.  And there are social penalties in this world, and, they believe, eternal penalties in the next.

There are other Mormon strengths, I'm sure, but I'll stop with these five.  Evangelical Protestants and Catholics share some of these strengths, actually (as opposed to liberal or 'mainline' Protestants, who share almost none of them, unfortunately).  Yet ironically, it is evangelical Protestants who seem to be having the greatest difficulty accepting the possibility of a Mormon President.

There is much to admire in the Mormon faith and tradition (as well as serious problems, particularly in their history, that I've outlined elsewhere).  It is truly a unique product of American history and culture and continues to give Utah and surrounding states a distinct cultural flavor.
Posted by Carl Lindquist at 6:19 PM