Leo DiCaprio and the head of his climate change foundation met with President-Elect Trump, Ivanka Trump and other members of the transition team yesterday in New York:


Leonardo DiCaprio and the head of his foundation met Wednesday with President-elect Donald Trump to discuss how jobs centered on preserving the environment can boost the economy.

In a statement to The Associated Press, Terry Tamminen, the CEO of the Leonardo DiCaprio Foundation, confirmed the meeting at Trump Tower in New York City. Tamminen said the pair gave a presentation to Trump, daughter Ivanka, and other members of Trump's team on how focusing on renewable, clean energy could create millions of jobs.

"Today, we presented the president-elect and his advisors with a framework — which LDF developed in consultation with leading voices in the fields of economics and environmentalism — that details how to unleash a major economic revival across the United States that is centered on investments in sustainable infrastructure," Tamminen said. "Our conversation focused on how to create millions of secure, American jobs in the construction and operation of commercial and residential clean, renewable energy generation."

The Oscar-winning actor has been a strong advocate of fighting climate change and preserving wildlife, and his recent documentary, Before the Flood, addresses the peril that the world faces because of climate change.

So now Trump has met with both former Vice-President Al Gore and Leo DiCaprio, the two leading American faces of concern about climate change (and both liberal Democrats).  It appears to be the initiative of his daughter Ivanka. 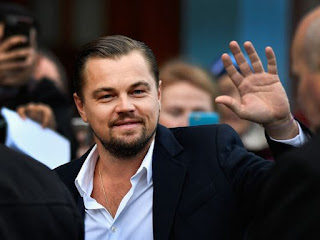 That's pretty amazing, given the scoffing on the conservative side of things about the issue of global warming.  It's pretty hard to imagine someone like Ted Cruz or Marco Rubio having those meetings in the midst of his busy Presidential transition schedule.

It tells me that Donald Trump is, as many of us have said all along, a pragmatist and not an ideologue when it comes to many national issues of concern.

Of course, it doesn't quite fit the liberal-left narrative that most of the MSM continues to peddle.  For example, even though the meeting happened yesterday, the 'newspaper of 'record', The New York Times, has yet to mention it (or at least I couldn't find any mention in a search I just did of their website, via my digital subscription).  No surprise there, since their anti-Trump narrative continues to dominate not only their opinion columns, but also their news reporting.

And honestly, that drives me crazy, since I've been reading the New York Times since college.  It's one of the reasons why many people don't trust the MSM these days to be fair and objective.  And it's also one of the reasons why 'fake news' can get such traction (literally, for a moment I thought that perhaps this meeting with DiCaprio was one such 'fake news' story, since the NYT wasn't covering it).

No one knows whether these meetings with Gore and DiCaprio will result in any substantial policy in a Trump administration when it comes to environmental issues.  But is it just for show?  Who knows, I sure don't.  But my gut level is that it is significant.  There are plenty of other controversial issues where he's NOT meeting with the 'opposition', so to speak.  This issue of climate change is clearly a serious concern of Ivanka Trump (and her generation), and in this case, I'm glad that she seems to have her father's ear.
Posted by Carl Lindquist at 10:37 AM